Some of Keith Dixon-Roche's discoveries in natural science (physics), all of which are protected by international copyright laws © 2017 to 2022, are summarised below. All of the mathematical and logical evidence is published in his various books (see our 'Books' menu) for all to see and challenge.

CalQlata has tried and failed to dispute their voracity, and apart from the inevitable unsubstantiated angry complaints from academia (Keith Dixon-Roche is an engineer, not a scientist), nobody is willing to even try to disprove them or even listen to him.

In order to generate some interest in today's industry, media, government and academia all of whom appear to be deaf to new ideas and theories; CalQlata is offering a valuable gift, to anybody (not just from academia) who can invalidate any one of Keith's claims;
if anybody can provide the same level of mathematical and logical evidence (as he provides in his books) to disprove any one of his discoveries, we will give that individual a free single-license to every calculator we have on sale today.

Mass is the collective non-polar magnetic charge (see 4) below) in all matter.

Gravity is the attractive magnetic force between the magnetic charge (see 2) above) in two or more bodies.

Because electrical charge and magnetic charge are essential converses (see 6) below);
m = 1.60217648753E-19 ? (units to be established {the Gilbert})
Magnetic charge is present in all atomic particles (see 21) below), constant, accrued and travels from positive to negative.

Every electrical charge has an equal and opposite magnetic charge (see 21) below).

Once established, a force-centre/satellite partnership will continue (eternally), even in the event the satellite is destroyed (e.g. the Asteroid Belt), until (or unless) the satellite is forcibly removed.
A non-atomic force-centre can trap numerous satellites, but it will not share them.
A binary star system (both bright) cannot exist unless both stars have their own independent satellite populations (solar systems).
A proton will only attract and hold onto a single orbiting electron because both have a constant potential electrical charge of the same magnitude, and that orbital partnership shall continue eternally, even when fused within an atom, unless the electron is forcibly removed (by impact or potential energy {potential difference}).

A [bright] star's satellite population is sufficient to generate the internal frictional heat to achieve the neutronic temperature of (see 34) below) and thereby fissionable decay in its matter.
The by-product of fissionable decay is hydrogen and helium and the reason that stars have an 'H' & 'He' atmosphere that grows in size with age.

'Big-Bangs' occur because the accreted universal mass at the end of a universal period is sufficient to generate the core pressure necessary to overcome the coupling ratio (see 31) below) and thereby compromise a neutron, which will initiate an atomic chain reaction; releasing neutronic energy (see 22) below).

18) The Mass of the Universe

The mass of the universe is that regured to overcome the coupling ratio and greater than 4.7134117E+48 kg;
which represents more than 2.80364E+75 electrons and a few more protons.

'The Great Attractor' is the matter that re-accreted soon after the last 'Big-Bang' and is sufficient to slow-down all universal matter travelling away from the 'Big-Bang'.
After 'The Great Attractor' re-accretes sufficient universal mass to overcome the coupling ratio (see 31) below), the next 'Big-Bang' will occur and next universal period will follow.
If the Milky-Way is travelling at the speed specified by NASA, the mass of the Great-Attractor is 2.1428862E+46 kg, we are currently 20% through our current universal period (see 20) below).

20) The Age of the Universe

The only particles required to make the universe work are the electron and the proton.
All electrons are identical and all protons are identical.
As a partner in a proton-electron pair (see 23) below), its additional magnetic charge allows a proton to increase its electrical charge by eꞌ = e.ξᵥ.√[Ṯ/Ṯₙ] (see 30) below).

22) The Properties of the Neutron

A neutron is a proton-electron pair that has united through high-temperature; which only occurs in stars.
Every neutron possesses: 1.63785606465701E-13 Joules of energy

The potential energy between a nucleic proton and its orbiting electron increases with electron energy (see 23) above), decreasing electron shell (orbital) radii.

All elements are created (through fusion) only in the largest coldest universal bodies; galactic force-centres and 'The Great Attractor' (see 9) and 19) above)
The atom comprises a nucleus of protons and neutrons, orbited by their electron partners in circular shells.
Each electron shell contains two electrons. The outer-most electron shell may contain one or two electrons.
There are no shell valences in an atom.
The magnetic field energy generated by an atom's proton-electron pairs is constant and responsible for attracting adjacent atoms.
The electrical charge collected by a nucleic proton (that is part of a proton-electron pair) is variable (see 21) above) and responsible for repelling adjacent atoms.
The magnetic charge in an atom's neutrons, and the electrical charge in its protons, are responsible for the nucleic structure of an atom.

Light is electro-magnetic energy and possesses no mass.

In circular orbits (e.g. atomic shells): potential energy between a force-centre and its satellite is twice the satellite's kinetic energy
PE = 2.KE = 2 . ½.m.v² = m.v²
At the speed of electro-magnetic energy (c); PE = m.c² (see 22) above)
This energy represents the maximum possible potential energy in nature.

The temperature of a proton-electron pair when the electron reaches the velocity of electro-magnetic radiation (c) and the highest possible temperature that can be generated in nature.
Ṯₙ = mₑ.c² / kB.Y = 623316124.717178 K 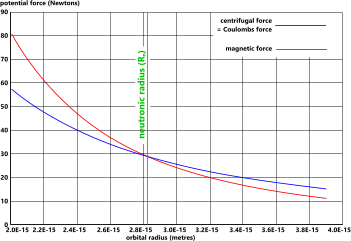 35) Neutrons and the Static Ratio (ξm)

The temperature we measure in matter is the kinetic energy in the electrons orbiting in an atom's innermost electron shells
Ṯ = X.v² (see 38) below)

The heat in matter is the sum of all the kinetic energy in all the orbiting electrons throughout the matter.

The following relationship applies to all orbits; it is an orbital law.
You will find that the planets about which we know the most (Orbits), give us the most accurate result.
But those that are slightly out, mean that the data given to us by NASA and others is not quite correct.
Of the calculations carried for the 170 orbits addressed in our study of the Laws of Motion, this relationship is rarely out by more than 5%.
However, this discovery, allows us to derive accurate properties for all of the celestial bodies (and their orbits) in our solar system.

The following have been proven mathematically and logically:
photons do not exist because it is impossible for electrons to travel at 'c'
black-holes are simply black bodies that generate no internal heat through friction and can be any size - they are cold because they are not satellites
mass does not change to energy with velocity; E=mc² refers to potential energy, not kinetic energy
event horizons are based upon a misunderstanding of light - it is actually astro-lensing, which is based upon Newton's gravitational constant (see 28) above)
fusion energy is only possible in galactic force-centres and the ultimate body, where atoms are cold and core-pressure is sufficient to overcome the potential energy in proton-electron pairs

The following have not only been shown incorrect, they have also become unnecessary because Isaac Newton's theories have been successfully applied to all of nature under any and all conditions:
Relativity
Quantum Theory
Dark Matter
String-Theory
Sub-Atomic Particles
Uncertainty
Anti-Matter
Unification Theory