This web page contains the reasons established by Keith Dixon-Roche as to why the theories of relativity can no longer be considered as a valid description of the behaviour of nature's matter.

For reasons of brevity, the theories of general and special relativity shall be referred to as 'Relativity' and the author of these theories as the 'Author'.

The Problem with Relativity

This web page includes numerous reasons why Relativity can no longer be considered appropriate for orbital motion, the most significant of which are:
1) All orbits work perfectly according to Newton's laws of orbital motion irrespective of conditions. Relativity is therefore unnecessary.
2) It does not comply with many aspects of Newton's laws of orbital motion
3) It is based upon E=mc² applying to matter in free-flight, which is incorrect.
4) It was developed to support a formula that was based upon photons, which don't exist.

Just one, or even two of the Reasons 1 to 6 below could be chalked up to coincidence, but all six!

Whilst it is possible to create a sub-theory to explain any distortion of reality you wish, why would you if there is no need?

When everything in the universe can be explained without a sub-theory, the sub-theory becomes redundant.

Relativity was driven by a desire to explain events that were either unknown or misunderstood. Now that we fully understand the theory behind all orbital systems, Relativity has become redundant, especially as it actually invalidates Newton's laws of orbital motion, that otherwise work perfectly, in every respect; irrespective of orbital shape or performance.

Keith Dixon-Roche has demonstrated that every aspect of astronomic and atomic theory can be explained using Newton's (and many other pre-20th-century) theories without exception. There is, therefore, no need for Relativity, which was invented to explain something misunderstood by its Author.

Light is apparently observed to deflect by an angle of 1.75 arc-seconds when passing at or close to the surface of our sun (Fig 1; α).

According to the Author, however, Isaac Newton's laws of gravity predict a deflection angle of half this value (0.875)

Relativity is a mathematical description of space-time/gravity distortion around celestial bodies that was developed to support the Author's formula for observed light deflection angles, which was based upon 'light-emitting photons' and their susceptibility to gravity.

The problem with the Author's approach is that the light we see all around us is electro-magnetic energy, not particles; i.e. light possesses no mass, so gravitational laws don't apply. 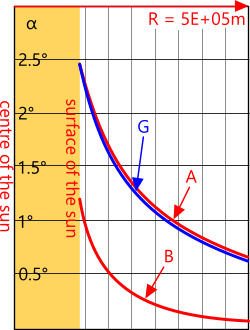 When calculating light deflection angles, the Author reduced the size of our sun by a factor of 5000, retaining its correct mass and increasing its density accordingly. Presumably, this was done to raise the calculated angles to a practical value.

Fig 2: Curve A shows the variation in 'α' according to Relativity, from the surface of the above modified sun to a distance 5E+05m from its centre.

Fig 2: Curve B shows the equivalent variation in 'α', according to the Author, when using Newton's laws of gravity on a photon

It is important to understand that it isn't necessary to prove the validity of an alternative theory in order to discredit the original. You only need to demonstrate that the same result may be achieved by applying valid input data to an identical model but without the need for a sub-theory for justification. The above formula does exactly that.

That light travels in waves and not as particles is not new; Christiaan Huygens declared this to be the case in the late 17th century and it was later restated by Faraday, Maxwell and Paulus.

Newton on the other hand declared light to be particles. The Author automatically declared Newton to be correct because he quite rightly held Newton in such high esteem, and therefore used Newton's laws of gravity to deflect [particle] light as it passed celestial bodies. The problem was that this produced incorrect values (Fig 2: Curve B), so the Author created a sub-theory to justify his calculations.

The Author's sub-theory was "general relativity"; the deformation of space-time. Defining 'α' based upon the laws of gravitational attraction is only a problem because light possesses no mass. This theory is therefore based upon a misunderstanding of the nature of light.

General relativity was also devised because of the Author's disbelief in force-fields, which he called the 'ether'. But whilst there is no such thing as the ether (as he understood it) we do know that force fields exist, as anybody holding two magnets close together, but not touching, will know.

It is currently claimed by all physicists that photons exist and that the light we see is emitted by them.

They also claim that electrons are 'weird beasts' that possess mass and travel in waves and this is the reason we cannot pin them down (uncertainty principle).

For example; an electron travelling at 1E+06m/s will possess a different energy to one travelling at 1E+08m/s. The electro-magnetic energy (wavelength; e.g. colour) each radiates must, therefore, also be different.
And if so, different wavelengths of light must be deflected at different angles (Reason 1: α) according to Newton's laws of gravitational attraction.

Which is contrary to the fundamental principle of both theories of Relativity; that "light possesses mass" and all wavelengths of light passing the same celestial body at the same radial distance is deflected at the same angle (α).


Therefore, the light we see cannot be photons, it must be electro-magnetic energy, which possesses no mass and is deflected by magnetic charge.

Not only is it unnecessary to deform space-time around celestial bodies in order to explain the deflection of light, it is mathematically incorrect to do so.

The neutronic radius, which is the orbital radius of an electron when it reaches velocity 'c', can only be explained using Newton's laws of orbital motion and Coulomb's law of electrical force. It occurs in far too many constants (magnetic, permittivity, Rydberg's, Planck's, Coulomb's, etc. {k, kꞌ, h, hꞌ, Rγ, R∞, εₒ, μₒ, μ, etc.}) to be rejected as a fundamental physical constant;

The conversion of mass to energy with velocity together with the space-time/gravitational distortion around force-centres as defined in Relativity, would render this radius impossible.
I.e. the electron would be orbiting inside the proton at 'c' and Rn would be incorrect.

Elliptical orbits are an indisputable fact of nature. This has been repeatedly demonstrated since Kepler's discovery in the 17th century. Its mathematical laws show that the elliptical shape is fundamental to the maintenance of perpetual-forward motion and the the balancing of gravitational and centrifugal forces in non-circular orbits. 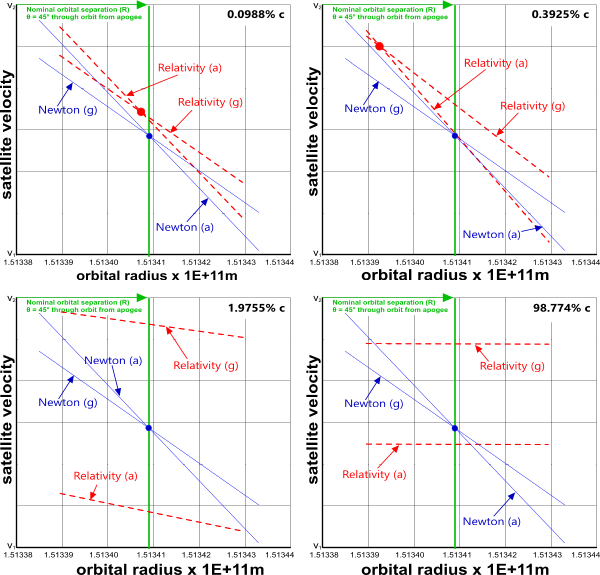 According to Relativity, 'velocity varies with velocity' thus; v = v/√[1+(v/c)²],
if this variability is applied to Earth's orbital velocity, whilst maintaining a constant energy (E = PE+KE = constant), the potential (gravitational) acceleration between the earth and its sun (a = -v.vᴬ / R.(1+e)) does not equal the earth's centrifugal acceleration.
Yet applying Newton's orbital velocity to the calculation of potential acceleration (2.A / t.R), parity between the accelerations is maintained, as demonstrated in Fig 3.
In order to ensure that 'E' is maintained throughout the earth's orbit using Relativistic velocity, the shape of the earth's orbit must be altered; it cannot be an ellipse. Moreover, it is difficult to maintain constant time throughout the orbit if the ellipse is distorted; the winter period of one second must be shorter than the summer second. Relativity deals with this problem by inventing another distortion of reality;
TAB = RAB - ½.gAB.R #

We know pretty accurately the distance of the earth from the sun at any time through its orbit. From this information we can confirm that the earth's orbit follows an exact ellipse.

We also know that one second (of time) in summer is exactly the same as a period of one second in winter, therefore time does not vary with orbital radius.

In other words, if we alter earth's orbit according to Relativity, external interaction (from other bodies) cannot be rectified naturally; yet they do!
but Newton's formulas work perfectly irrespective of satellite velocity (Fig 3).

Moreover, every orbit calculated (well over 200) in the creation of this thesis shows that there is no orbital deviation (at all), of any moon or planet in our solar system from its elliptical shape, irrespective of the size of the orbit from the observed values as published by NASA.
In fact, a satellite travelling close to another large satellite is not pulled from its orbit, as thought by Kepler and Newton, both satellite elliptical orbits are rotated slightly, about their force-centre.

E=mc² was first postulated by Henri Poincaré towards the end of the 19th century, however, he did not explain its physical relevance other than it represented a terminal velocity.

During the creation of his atomic theory, Keith Dixon-Roche discovered that this relationship is the potential energy between a satellite and its force-centre in circular orbits (atoms), where;
PE = -2.KE
KE = ½.m.v²; PE = m.v²
and at the speed of light, an electron orbits its proton at radius Rn, which is a fundamental constant (magnetic constant: mₑ.Rn/e² = 1E-07 kg.m/C²) where PE = m.c² at the creation of a neutron.

Whilst Poincaré's formula (E = m.c²) does indeed represent a terminal velocity, it only applies to potential energy when a satellite is orbiting at speed 'c' in circular orbits. At this speed, the electrical field and magnetic attractive energy between an electron and its proton exceeds centrifugal repulsion energy and they combine to create a neutron. It does not refer to an electron (or any other matter) in free-flight travelling at the speed of light.
'E=m.c²' refers to potential energy, not kinetic energy.

That said, electro-magnetic energy can only be radiated whilst an orbiting electron is travelling at less than 'c', which means that no electron can naturally have more kinetic energy (which it gets from electro-magnetic radiation) than E = ½m.c². This relationship does not mean that an electron, or anything else, cannot travel faster than 'c' if it isn't given sufficient energy artificially.

E=mc², which only applies to orbital velocity, is the reason for the neutron (see Reason 3 above). It does not apply to matter in free-flight and mass does not vary with velocity.
Even the formula that was contrived to rationalise this belief: m = mₒ / √[1-(v/c)²]
doesn't work as it seems to show that mass is infinite when; v = c

This means that in Relativity, E=mc² has been inappropriately applied to kinetic energy to describe mass-energy variation with velocity, which does not actually occur; mass does not vary with velocity.

At the time Relativity was theorised, neither the Author, nor any other individual was aware that there must [by law of nature] be a force-centres at the heart of every orbital system. Nor was he aware of [planetary] spin theory, and therefore misunderstood the effect of galactic population on orbital shapes; hence the prediction of dark matter.

It is now possible, not only to use this basic law of nature to disprove the existence of dark matter, but also to calculate galactic force-centre size; for example; Hades