This webpage provides the evidence that a Newtonian atomic model can mathematically predict any property of any and all atoms simply from its atomic number, and thereby renders Quantum Theory unnecessary.

The purpose of this study is to answer the following question:
1) Can the Newtonian atomic model be used to predict its properties simply from its atomic number?

The answer to the above question is yes, albeit input from Coulomb, Rydberg and Planck was required to complete it.
Calculators based upon this atomic model are now available (see Sources above) that predict the density of matter (viscous and gaseous), EME spectrum (at any temperature), gas transition temperature and specific heat capacity of all 92 natural atoms simply from their atomic numbers. When considered together with its ability to predict the noble gas atoms, and alternative calculation methods for PVRT and Drag, along with the verification calculation example (below), this (Newtonian) model must be declared correct and that the Quantum model, which cannot, must be declared redundant.

The atom is simple, elegant and a brilliant piece of engineering. Whilst all the information needed to understand it was available at the end of the 19ᵗʰ century, a total appreciation of its qualities has continued to elude us. 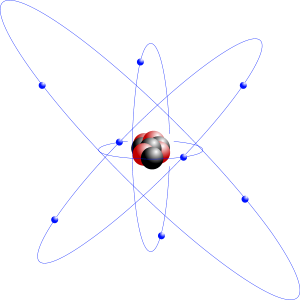 An atom is a collection of proton-electron pairs, each with one or two neutrons attached and their electrons orbiting in equally-spaced circular shells.
Each electron shell contains two electrons - orbiting opposite each other - except the outer shell which may contain one or two electrons, dependent upon atomic number. During electrical transfer, the outermost electrons (with the lowest potential energy) are always removed. If an inner electron is knocked from its shell, all the outer electrons will relocate inwards to fill the resultant valence. There are no shell valences; all potential forces must balance.
Every proton, neutron and electron in every atom is identical to every other proton, neutron and electron in the universe, and obeys Newton's laws of orbital motion, Coulomb's force law and spin theory.
Full-stop. That's it. Nothing more.
Simple isn't it!
But the fact is, it works. This model can mathematically predict all the properties of every atom at any temperature. So, it must be correct.

An atom is a collection of identical electrons, identical protons and identical neutrons. They are arranged as unique proton-electron pairs each of which possesses one or two neutrons that are held by the magnetic field force generated by the proton-electron pair.
Each electron is orbiting its proton partner; not the atomic nucleus. The collection of proton-neutron partnerships are inside a collection of electron shells only because they have been forced there by fusion inside a cold body (at the temperature of outer space) with sufficient internal gravitational force, such as galactic force-centres, the Great Attractor and the ultimate body.
The higher a proton-electron pair's temperature, the greater the build up of electrical charge (e') in its proton - provided by its orbiting electron partner - drawing the orbiting electron closer to its proton partner; reducing its orbital radius and strengthening the atom.
However, the electrical charge generated in the proton will also rise with increasing temperature. When this repulsive force exceeds the magnetic field force the atoms will exist as a gas.

Each electron shell contains two electrons - except the outermost shell which can hold one or two electrons dependent upon atomic number - both of which are identical.
All the electrons are held in their shells by a balancing act between mutual electrical repulsion, and attraction to their proton partners in exactly the same way as Newton described the balance between centrifugal force and gravitational force in an orbiting satellite and its force-centre.

The nucleus of an atom comprises protons and neutrons according to a neutronic ratio (ψ), which may theoretically range between 1.0 and 2.0
Note: each proton electron pair within an atom is either a deuterium atom (1.0) or a tritium atom (2.0).
In practice, however, as soon as an atom's neutronic ratio exceeds 1.6, the atom will spontaneously split into smaller atoms, with smaller atomic numbers.
Atoms close to this neutronic ratio (ψ) will spontaneously and continuously eject two neutrons splitting both into their component parts; an electron and a proton.
If after splitting into its component parts the proton cannot escape its nucleus, the proton-electron pair will instantly release its stored energy in the form of electro-magnetic energy (heat) and the atom's atomic number will increase by one.
If on the other hand the proton does escape its nucleus, the component parts will be released as an alpha particle and a beta particle, at a velocity commensurate with the energy released.

As orbiting electron velocities increase with rising temperature, their orbital radii decrease owing to the increased electrical charge collected and retained by their proton partners, which increases the potential energy in the proton-electron pairs, thereby increasing the strength of the atoms in which they reside.
I.e. the strength of an atomic assembly rises with increasing temperature.
The relationship between proton electrical charge and temperature may be calculated as follows:
e' = e.ξᵥ.√[Ṯ/Ṯₙ]
However, this same increase in proton electrical charge drives adjacent atoms apart (Fig 2), see The State of Matter below.

Isotopes are atoms with the same atomic number (Z) but with varying atomic mass due to unequal proton-neutron pairing.

Over time, the electro-magnetic magnetism generated by atomic nuclei will split surplus neutrons into their component parts, changing the atom into a different element. As the number of protons increases, the atoms will become less stable (stability is determined by nucleic structure) and subsequently divide into smaller atoms. The rate at which this occurs is referred to as the half-life of the atom. The half-life of any atom is a constant, it never changes.

Apart from oxygen all atoms naturally have more neutrons than protons.

Ions are atoms with the same atomic number (Z) but possess an electrical charge due to unequal proton-electron pairing.

Only a few atoms exist naturally as negative ions and they are all non-metalsN except for two, which are semi-metalsS:

Any atom can become a positive ion simply by losing one or more of its electrons from impact with free electrons or a strong external positive electrical charge.

Negatively charged ions are a little more difficult to understand. Additional electrons need to be trapped by the positive charge in protons that do not exist in the nucleus, which shouldn't be possible. However, the nucleic structures of the above non-metal atoms probably have at least one exposed proton that is not protected by a neutron, giving its additional electrical charge (e') the ability to trap passing free electrons

Fig 3. The mathematical prediction of the electro-magnetic energy radiated by our sun

Whilst the above description and formulas are sufficient to analyse any atom at any temperature, the following reference publications provide considerably greater detail to that provided above.

The above calculations represent a theoretically perfect condition in which every molecule passing through the boiler achieves the correct temperature rise, which is impossible. It is expected, therefore, that some of the water passing through the boiler must be at a slightly lower than expected temperature. Whilst the power required to raise the temperature of every molecule of water is predicted as 32kW, the actual power (allowing for some slightly cooler molecules) of 30.5kW is considered reasonable. Moreover, the predicted (calculated) efficiency (92.3%) relates very well to the manufacturer's claim (90%).

In conclusion, however, this example confirms that the Newton/Coulomb atomic model is correct.