The State of Matter

This webpage provides the evidence that the Newton-Coulomb atomic model can be used to predict the properties of same-element matter.

The purpose of this study is to answer the following question:
1) Can the Newton-Coulomb atomic model be used to predict the properties of elemental matter using mathematics?

The answer to the above question is yes.
An online calculator for this subject is now available on this website.

Matter is a collection of atoms.
In its basic form, it is a crystal lattice of same-element atoms, the properties of which can be easily predicted using mathematics.

Today we think of three states of matter; solid, liquid and gaseous. But their are in fact, only two; viscous which includes solid and liquid, and gaseous.
The difference between these two conditions is that in viscous matter, the magnetic [field] attraction between adjcent atoms is greater than the electrical chrge repulsion in their nucleic protons. In gaseous matter, the reverse is true.
Solidity is a relative term; it describes the shear strength in matter. The point is, that solid and liquid matter are in the same state, the only difference is the shear force required to induce plastic deformation in their lattice structures.

The state of matter refers to its condition; viscous or gaseous, which is governed by the relationship between its temperature and its density, both of which are governed by the neutronic ratio (ψ) of its atoms. It appears therefore, that an element's characteristics are defined by its neutrons. If it was based upon its protons (Z), the plots in Fig 1 would be linear.

This study of elemental matter was sparked by the discovery that their densities (ρ) and gas transition temperatures (Ṯg) are directly related by their neutronic ratio, which is clearly revealed in Fig 1. Because the plots in Fig 1 are based upon documented data, it is understood that there will be minor discrepancies due to experimental error. However, as we now know how atoms work, we can apply this information to how same-element atoms interact; as matter. 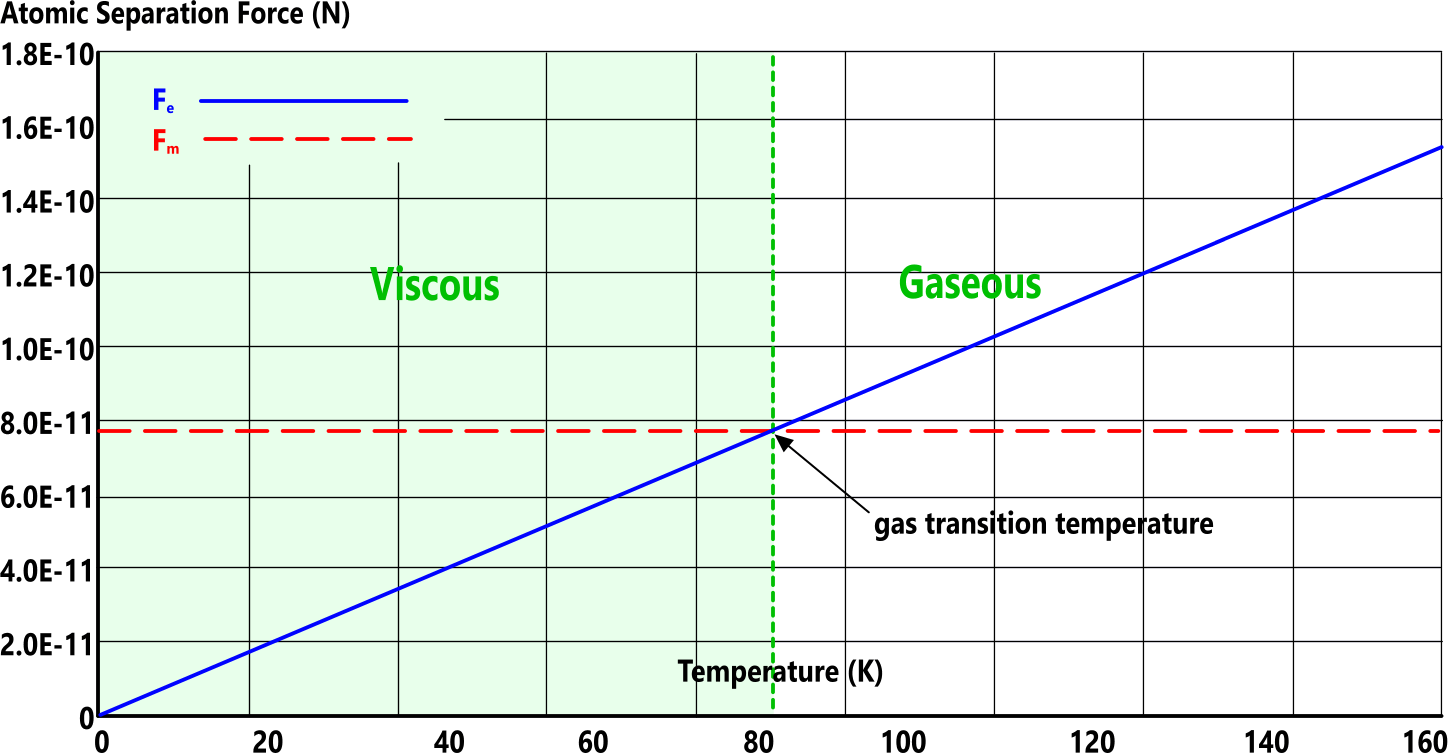 For example; all adjacent atoms are attracted by the magnetic field generated by their proton-electron pairs, and repulsed by their electrical charges, exactly as Coulomb explained. Therefore, magnetism must be responsible for an element's viscosity and electricity must define its gaseous properties.
And because magnetism is not affected by temperature, this inter-atomic attraction never changes in viscous matter#. But the electrical charge collected by an atom's protons does vary with temperature; therefore, as temperature rises so too does inter-atomic repulsion. When the collective electrical charge in an atom's protons exceeds its magnetic attraction, the matter will exist as a gas.
# apart from minor variations due to changes in crystal structure.

Where:
mₐ is the atomic mass
R is the inter-atomic radial separation
N is the number of atoms in the gaseous molecule (1 or 2)
PE₁ is the potential energy in the atom's innermost shell (shell number 1) proton-electron pairs

Lattice Constant: ζ is the temperature:density ratio (Fig 3)
Where Tg is the gas-transition temperature of the atom, and ρ is its viscous density. The formula used to establish its value is:
ζ = ³√[ Ṯg.A.(Ψ-1) / ρ.R ]
radius 'R' was calculated from; Ṯg = Mₐ / N.A.R²
It should be understood that this constant has been set here using documented values for ρ & Tg, both of which are subject to experimental error; some mismatch is therefore expected. But as can be seen in Fig 3, the relationship is clearly identified (see Discussion below).

This radius may be calculated as follows:
R = √[ mₐ / N.Ṯg.A ]
and the following formulas:
Ṯg = mₐ / N.R².A & ρ = Ṯg.A.(ψ-1) / ζ³.R
may be used to define the values for gas transition temperature and viscous density, both of which are plotted in Figs 4a & 4b#
# both graphs include two plots, one blue and one red. The blue plot is hidden behind the red plot

It is important to understand that the gas transition temperature (Ṯg) can only occur when the magnetic and electrical forces (Fₘ and Fₑ) are equal (Fig 2) at the same atomic separation radius. In other words, whilst the separation radii between adjacent atoms will always be identical whether viscous or gaseous, at temperatures above and below 'Ṯg', these forces will not be equal.

The Properties of Same-Element Matter

Fig 4b. Density; Calculated vs Documented

Using the above values; Z, RAM, ψ, Γ & R, we can now calculate the properties of any and all same-elemental matter.

The specific heat capacity of any atom may be calculated for any temperature using the following formula:
SHC = KET / Y.mₐ.Ṯ
where Ṯ is the measured temperature of the atoms; i.e. that of the proton-electron pairs whose electrons are orbiting in the atoms innermost shell (shell-1), and KET is the sum of all of the kinetic energies in all the atom's electrons.
Fig 5 shows quite clearly that the calculated values match those extracted from various document sources.

Potential acceleration is the magnetic [field] attraction and electrical [charge] repulsion between adjacent atoms, which can be calculated as follows:
gₘ = G.mₐ / φ.R²
gₑ = Fₘ.R / μ.e²
gₘ must equal gₑ at all times, whether the elements are in viscous or gaseous state.

It is possible to determine the state of matter using the atomic separation force formulas (provided above); i.e. it will be gaseous if Fₑ is greater (than Fₘ) otherwise it will be viscous.

Fig 6. The calculated Condition for Matter

Viscosity is the frictional resistance between adjacent atoms and only applies to viscous matter.

Dynamic viscosity is the difference between the magnetic and electrical forces (at a particular temperature) and may be calculated as follows:
μ = (Fₘ-Fₑ)/hₚ {N.s/m²}
If the result is negative, i.e. electrical repulsion (Fₑ) is greater than magnetic attraction (Fₘ), the matter will be gaseous and offer no viscous resistance.

The tensile modulus is a reflection of the pressure exerted between adjacent atoms due to their magnetic [field] force (Fₘ). However, as temperature rises, so too does the electrical [charge] repulsion. This not only reduces viscosity in viscous matter, but also reduces the attractive pressure holding the atoms together in the form of viscous matter.
The tensile modulus of a pure and perfect crystal of any elemental matter can be calculated from its dynamic viscosity:
E = μ.ƒ / √ζ (N.s/m² . 1/s = N/m²)
where 'ƒ' is the orbital frequency of the electrons in shell-1 of the elemental atoms, which may be calculated as follows:
ƒ = √[XR / X.R₁] / (2πR₁) = √[Ṯ/X] / (2πR₁)
'R₁' is the orbital radius of the electrons in shell-1 and 'Ṯ' is the measured temperature of the matter.

The current method for calculating the resistance (force) generated in a body travelling through a gas was established by J. R. Morrison et. al.


However, the above atomic model can also be used to determine this same force.

We know from above that magnetism (magnetic field) holds atoms together and electrical charge forces them apart (Fig 2).
Therefore, the drag induced in a body travelling through a gas (e.g. our atmosphere) is almost certainly caused by the magnetic field generated between adjacent gas and body atoms.

The following Table lists a 'force' comparison between the two above calculation options based upon the following variables:
surface area: A = 3 m²
coefficient of drag: Cd = 0.75

Whether or not inter-atomic magnetism is the cause of atmospheric drag, the above calculation makes this argument extremely compelling; yet again validating this atomic model.

Finally we need to identify a relationship between the radial separation as calculated using the formula provided above, and another using the lattice constant (ζ):
actual radius as calculated above         calculated radius (excluding ρ & Ṯg): R = π.aₒ.³√Γ / ζ

As can be seen in Fig 8, there exists an unmistakeable relationship between the two. In order to match the two plots exactly, we simply need to vary (correct) the solid/liquid densities and gas transition temperatures (ρ and Ṯg) for each of the elements to identify their true values. The differences (±<5%) will be due to experimental errors in the documented values.

The most important validation of this atomic and elemental model is the accurate prediction of the properties of any gas at any temperature using the potential energy of an atom's electron kinetic energy; replacing the need for the ubiquitous PVRT formula.

But when considered together with the accurate prediction of the specific heat capacity of any and all atoms (Fig 5), there can no longer be any doubt that the Newton-Coulomb atom is the correct model.

It is interesting to note that the noble gases are directly related to 'Γ' (Fig 9).

Given that together with its neutronic ratio (ψ) we can define an element's density, radial separation and the rate at which its atoms eject its neutrons (radioactive fission), it is highly likely that neutrons - not protons - govern the behaviour of elements and thereby define their characteristics. 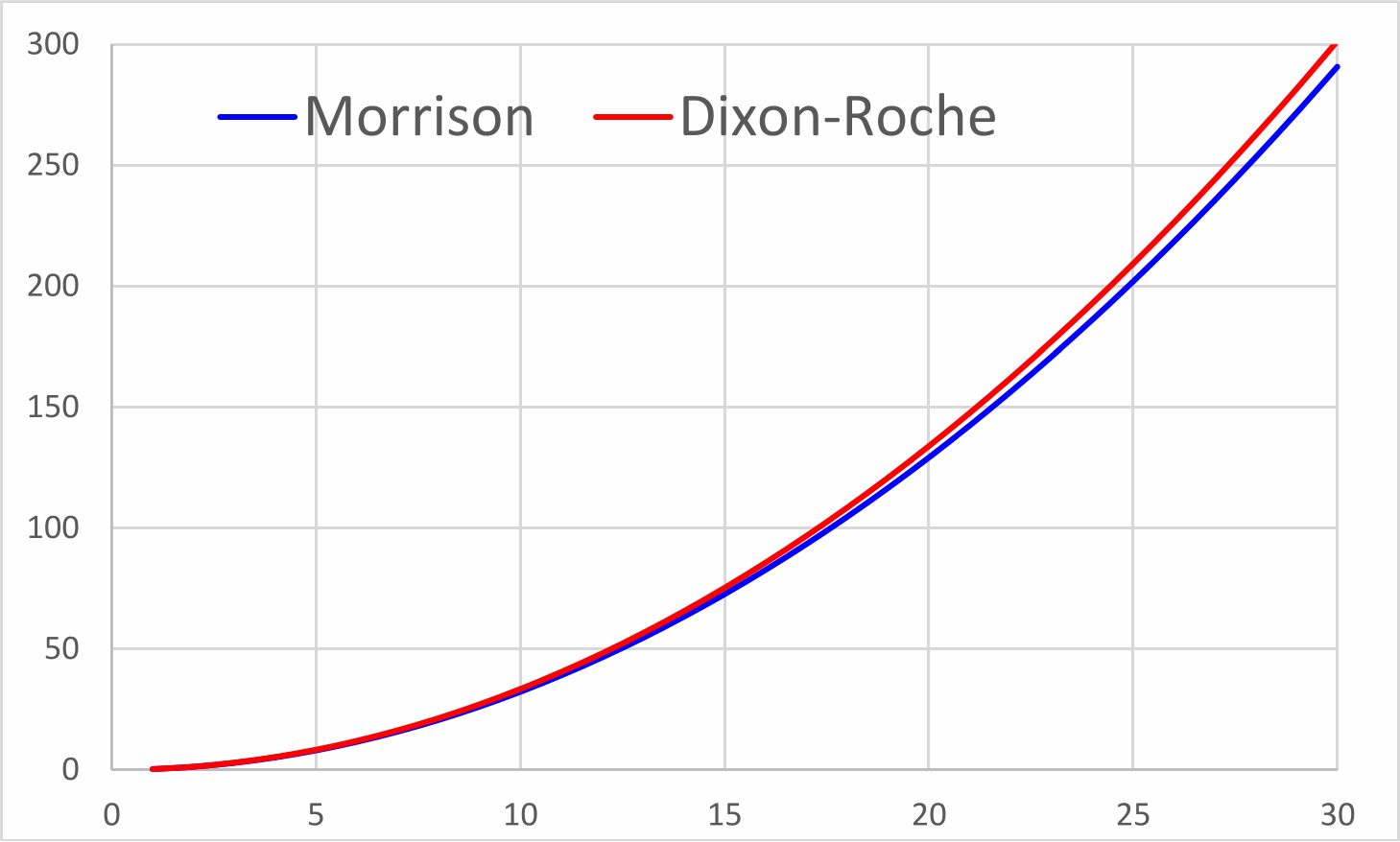 Note: Γ = 9.(ψ -1)
And because neutrons also store all of the universe's energy, they play a far more important part in the workings of the universe - and everything within it - than with which they are currently credited.

It could be argued that, because lattice constant 'ζ' and radial separation radii (R) were originally established from documented data, that the above results were contrived. However, all of the properties calculated above use 'R' in different forms:
Tg (1/R²); ρ (1/R); Fₘ (1/R³); Fₑ (1/R); gₘ (1/R²); gₑ (.R); E (1/R²)
If this radius is altered, at least three of these calculated properties will be incorrect.
Many different radii have been tried during this study, but the above values are the only ones found that ensure full compliance.

But another (PVRT) compelling argument for this atomic model is as follows:
Same-polarity electrical charge induces repulsion. It is this property in adjacent protons (e') that determines whether matter exists in viscous or gaseous state.

If the force generated by the electrical charge in adjacent protons is greater than the force exerted by the magnetic field generated by an atom's proton-electron pairs (Fₑ>Fₘ), matter will exist as a gas, and vice versa (Fₑ<Fₘ).
The gas transition point (Ṯg) occurs when both forces are equal (Fₑ=Fₘ)

The elementary charge unit, as it applies to active protons (those partnered with an orbiting electron) is defined as follows:
e' = e.ξᵥ . √[Ṯ/Ṯₙ]
Coulomb's force formula for adjacent protons is therefore; Fₑ = k'.e'²/R²
where e'² = (e.ξᵥ)² . Ṯ/Ṯₙ

You must bear in mind that the calculations shown in the main-text above (Fig 4a) are for elemental matter at atmospheric pressure at the surface of the earth, and the values calculated in Fig 10 are for elemental matter at zero [atmospheric] pressure.
Given that the gas transition temperature of matter varies with atmospheric pressure, whilst Ṯg would not be identical for alternative pressures, it would be expected to follow a similar pattern; and indeed it does.
The reason that the gas transition temperature of some of the elements actually increases with reduced pressure has yet to be established, but it is suspected that this is related to the neutronic ratio.