This web page contains the reasons established by Keith Dixon-Roche as to why quantum theory can no longer be considered as a valid description of the structure or behaviour of atoms.

For reasons of brevity, Quantum Theory shall be referred to as 'QT' and its author as the 'Author'.

The Problem with Quantum Theory

There are numerous reasons why QT can no longer be considered appropriate for the description of atoms, the most significant of which are listed below.

1) Whilst QT cannot explain or describe the behaviour of atoms in terms of what we see, feel and hear in the universe, an atom according to Isaac Newton and Coulomb can do this.

4) QT required the invention of 'string-theory' along with numerous sub-atomic particles (e.g. quarks, fermions, bosons, gluons, etc.) in order to make the atom work, whereas Newton and Coulomb can make the entire universe work with just two particles; the electron and the proton.

5) QT relies on statistics for justification; statistics apply only to the consequences of the laws of nature, never the laws themselves.

6) QT's Author needed intimidation to force acceptance of his theories by the scientific community;
'if you aren't profoundly shocked by quantum physics, then you haven't understood it'

8) It was necessary to invent sub-theories (including the uncertainty principle) to explain why electron location cannot be predicted in QT. This approach is similar to that devised by religious communities for their gods; “I refuse to prove I exist, for proof denies faith and without faith I am nothing”. It is an Untenable position.

The single biggest problem with QT (item 3 above) is that its atom can only absorb energy, it has no way to emit it.

QT was driven by a desire to explain events that were either unknown or misunderstood. Now that we fully understand the theory behind all orbital systems, QT has become redundant, especially as it does not obey Newton's laws of orbital motion.

Whilst it is possible to create a sub-theory to explain any distortion of reality you wish, why would you if there is no need?

When everything in the universe can be explained without a sub-theory, the sub-theory becomes redundant.

It seems clear that Quantum Theory must be declared 'dead in the water', given that it fails to address the atom's single most important issue; the emission of electro-magnetic energy,
whilst Newton's and Coulomb's laws together can explain all aspects of atomic structure and performance.

Relativity and quantum theory came about because of an error made prior to the 20th century. Keith Dixon-Roche believes that this error is responsible for having stalled scientific progress for a hundred years.

It is currently believed that electrons emit light; they don't.

We have been taught this for a hundred years, forcing us to create fanciful theories to explain how mass moves in waves; it doesn't.

The photon exists in our minds because of a very simple mistake made a long time ago relating to Crooke's tube. 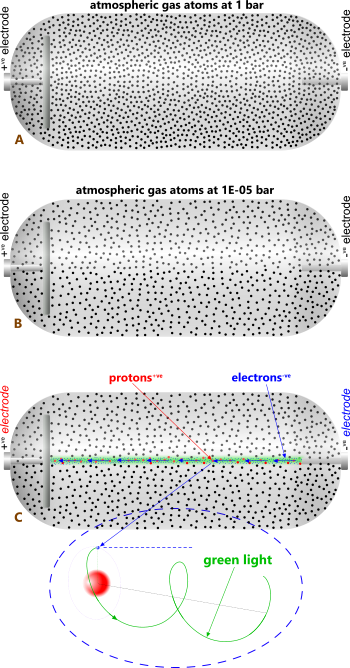 Crooke, and everyone since, believed that he had created a perfect vacuum by pumping out all the air from his tube; he hadn't! His tube contained a measured vacuum, it was not a true vacuum; there were millions of protons and atmospheric atoms inside it (Fig 2). It is impossible to create a perfect vacuum on planet Earth, or on any other planet with an atmosphere; irrespective of density.

When Crooke fired electrons from one end of his tube to the other, they appeared to emit light. So, he and everyone since believed that electrons must emit light. But the light you are seeing is not emitted by electrons, it is the electro-magnetic radiation emitted due to their interaction with protons in the tube. When a bar magnet is placed beside the tube, the light path deflects. What you see is not the bending of light (although magnetism does bend light, but only very slightly), the dramatic deflection you see is that of the path of the electrons; the light is emitted by interactions along this deflected path.

And this is how it works:
Fill a glass tube with air at atmospheric pressure (Fig 1; A) and install electrodes either end.
Suck out as much of the air as possible, reducing its internal pressure to say, 1E-05 bar (Fig 1; B).
Connect the electrodes to a battery or electricity generator driving the electrons towards the positive electrode (Fig 1; C).
Electrons passing a lone proton (H⁺) will be pulled into orbit at the velocity induced by the voltage across the electrodes, and others - due to their much greater kinetic energy - will knock-out and replace the slower electrons orbiting within atmospheric atoms.
The electron's orbital radius will be dependent upon its velocity at the time of entrapment. This velocity and orbital radius will generate EME with the following characteristics:
wavelength: λ = c/ƒ
frequency; ƒ = v / 2πR
amplitude: A = R (orbital radius)
If the light is green;
v ≈ 960,630 m/s
R = A ≈ 2.744E-10 m
ƒ ≈ 5.57E+14 Hz
λ ≈ 5.38E-07 m
Ṯ ≈ 6400 K

During his 'light-on-a-metal-plate' experiment Max Planck detected a feint but perceptible electric charge that 'pulsated', confirming that it was induced by electro-magnetic energy (AC). If it had been induced by a stream of electrons (photons) it would have been continuous as in a battery (DC), confirming that light is electro-magnetic energy not electrons.

These are the main reasons why relativity and quantum theory remain unproven after 100 years; they both rely on light-emitting electrons.

The light emitted by stars and everything else in the universe is not brought to us by electrons: it is radiated electro-magnetic energy. Michael Faraday understood this and James Clerk Maxwell described it mathematically.

Once these issues are understood, the whole problem of energy, electro-magnetism, magnetism, gravity, etc. vanishes. Therefore, you should concentrate on the real universe as described by Isaac Newton, Michael Faraday and Charles-Augustin de Coulomb and not on QT or Relativity. 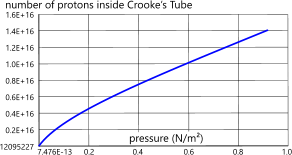 Crooke would have had to remove every proton from inside his tube to claim that electrons fired within it were emitting light.

Gas pressure, including that in air, is generated by the repulsive force due to the positive electrical charge between the protons in adjacent atoms.
This repulsion (force) drops off very quickly with the distance between the atoms (see Earth's Atmosphere; Fig 1), and as can be seen from the above graph, even at 7.5E-13 N/mm² (7.5E-18 bar), there would still have been about 12 million protons inside his tube.