Planetary Spin
(the cause of heat within stars and planets)

A mathematical description of the theory of planetary spin in planets and stars and the cause of their internal heat. Planetary spin is calculated using the forces and energies generated by Newton's orbital motion

It not only accurately predicts all aspects of the spin of every planet and the sun in our solar system, it does so using Newton's own theories and is the only study we (at CalQlata) know on this subject that manifestly works.

Note: All the input data in these calculations has been provided by CalQlata's Solar System Orbits
All the calculations are the sole copyright priority of Keith Dixon-Roche © 2017
Keith Dixon-Roche is also responsible for all the other web pages on this site related to planetary motions
A 'pdf' version of this paper can be found at: Planetary Spin - The Paper

A calculator is now available for Keith Dixon-Roche's planetary spin

The purpose of this paper is to answer the following questions:

1) What causes a star or a planet to rotate on its axis?

2) What defines the magnitude and direction of this rotation?

(Refer to Mathematical Symbols & Units for an explanation of the terminology, mathematical symbols and units in this web page)

The calculations in this paper identify the cause of spin in stars, planets and moons in terms of, and according to, Newtonian mechanics

Planets with satellites (moons) are induced with spin energies so much higher than the induced energy from the sun that this reversal would not materialise.

Planetary spin can also be used to calculate the internal properties of a planet or star, including its magnetic field 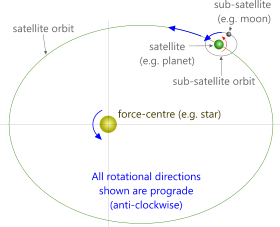 The following procedure was used to establish the controlling formulas for planetary spin using our solar system for verification:

Isolate and identify the relative angular direction(s) imposed on a planet by its force-centre and its satellite(s) and determine the energy sources responsible for their generation.

It will be assumed that only orbiting bodies and their force-centres can induce spin in each other, which is actually correct as all spin energies can be found from Newtonian mechanics.

The bodies are defined in Fig 1 according general understanding. In this paper, however:

1) A force-centre can be galactic, solar or planetary, which may have their own satellites

2) A satellite can be solar, planetary or lunar, which may have their own secondary satellites

The polar moment of inertia of any body may be calculated thus:
J = ⅖.m.(Δ.r)²

The relative angular velocities induced in a planet (or star) are defined below. 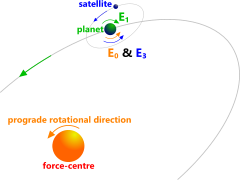 The gravitational energy between the core of a sun and that of its planet will induce spin (ωₒ) in the planet with the same direction and period as that of its sun
(e.g. Fig 2; +ve or prograde).
If a sun has only one planet with no moons, they would both have the same angular velocity (ω₁ = ωₒ). Otherwise, the sun and planets would spin at different rates.

This is the starting point for the calculation procedure.

This energy will cause a planet to rotate in the opposite direction (e.g. Fig 1; -ve or retrograde)

Satellites induce spin throughout the mass of their force-centre in the same direction as their orbit.

The energy inducing the angular velocity of a planet (E₂) may be calculated thus:

The angular velocity of a planet (ω₂) may be calculated thus:

The orbital energy that defines the angular velocity of a force-centre may be calculated thus:
E = m.Aₒ.ω₂ₒ² / 2.π.(1-½e²)
In which E is the total energy calculated in Newton's Laws of Motion

The following Table shows the relevant spin energies in some of the bodies in our solar system:

Claim 1: The spin in any force-centre or satellite can be calculated using Newtonian mechanics

Claim 2: The spin in a force-centre is induced by its orbiting bodies

Claim 3: A satellite's spin rate will be altered by a force centre rotating at a different angular velocity

Claim 4: Only force-centres and their satellites can influence each other's angular velocity

A mass orbiting a force-centre will generate a positive kinetic energy (KE) and a negative potential energy (PE) between the force-centre and the orbiting body. The sum of the two is Newton's combined energy (E). Refer to Laws of Motion.

The potential energy (PE) between two or more bodies is also gravitational energy.

'δKE' is the difference between the kinetic energies of a satellite at its perigee and its apogee {J}
i.e. δKE = KEᴾ - KEᴬ

'E₂' is the total spin energy in a satellite {kg.m²}

'E₃' is the spin energy induced in a satellite by its secondary satellite(s) {kg.m²}

'Eₒ' is the natural spin energy in a satellite induced by its own orbit {kg.m²}

'T' is the satellite's orbital period

'r' is the satellite's radius

For the purposes of this document, the terms 'rotational' and 'angular' are interchangeable; all such velocities shall be interpreted has having magnitude and direction.

It is generally believed that a sun rotates under its own steam pulling its planets around with it. If this were the case, it would need a suitable energy source to do so, moreover, the same claim must also apply to rotating planets. Whilst this claim may (or may not) be made for our sun and even Earth itself, it cannot be made for planets such as Pluto, which is a solid lump of rock and ice with no internal energy source. Moreover, Pluto's local orbit (Appendix 7) could not be explained by such an internal energy source.

It is therefore claimed (by the author) that as an orbiting body induces far greater rotational energy spin in its force centre than vice-versa and the initiation of a solar system must be due to a force-centre that was not initially rotating being caused to orbit by its orbiting bodies.

Subsequent rotational influence by a force-centre on its satellites will occur once in motion, but is insufficient to generate the energies required to maintain their orbits.

However, this formula only applies to a sphere that comprises the same homogeneous material throughout its structure. Planets, however, are anything but homogeneous as gravitational energy generates very high densities at their cores (Fig 4)

'Δ' in the above formula can provide us with an equivalent representative radius of an homogeneous sphere with the same mass and the correct polar moment of inertia (J) as follows:

The calculated variable; 'Δ' for various solar system bodies is provided in the following Table 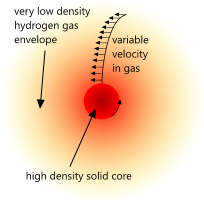 This value (Δ) can be used to establish the composition of a planet, star or moon, as described on our web page for Core Pressure

From this study, it appears unlikely that the earth, or any other planet spent its first half-billion years or so in a molten or even especially heated condition. Accretion doesn't generate heat and there is no physical evidence on earth to indicate such a condition during its early life. Moreover, the fact that the earth's internal heat is not left over from its birth but constantly generated by the competing spin-related influences from its force-centre and its satellite seems to indicate otherwise.

Via 'Δ', spin theory has allowed us to estimate the internal composition of a few of the satellites in our solar system.

Venus spins the opposite way to the other planets because; a) it has no moon(s) to drive it in the other direction and; b) it is sufficiently large to resist the sun's influence on its spin direction.
Refer to the relevant calculation for Venus; Example Calculation 1

Venus is, and always has been, too close to the sun to allow water to exist on its surface in liquid form. The mass of water vapour (similar to that on the surface of the earth) maintains the surface temperature of Venus. Almost all its surface heat comes from the sun and is retained by atmospheric water vapour.

Whilst Venus contains a similar percentage of iron to the earth, it has a far lower concentration at its core because it has no moon. The earth's moon is, and always has been, responsible for the differential spin-rate of the earth's core and its mantle and thereby generating its magnetic field and its internal heat, providing the mechanism for its iron to migrate towards its core. Venus has no magnetic field or internal heat because its core is not spinning at a different rate to its mantle.

Because Venus has no rotating core and no liquid surface water, it has no mantle plumes, low volcanic activity and therefore cannot generate active tectonic-plates.

The reason Venus' erupted surface material is so flat (non-effusive) is because, having no mantle plumes and little internal heat, its volcanic activity is much less aggressive than that within the earth.

Its exceptionally low 'Δ' value, low density (3300 kg/m³), red colour and large, rapid primary moon (Phobos) suggest that Mars may well be an iron planet that lead a short ultra-active life due to a fast-spinning iron core, which would have been responsible for creating such enormous volcanoes such as 'Olympus Mons'. As a result of this level of internal activity, its' relatively low mass will have caused Mars to discharge all of its ferrite-rich material onto its surface very quickly. Mars is therefore; probably hollow giving it that deceptively low density.

During this early activity, sufficient internal heat would have been generated to maintain Mars' surface water in liquid form despite its distance from the sun and may also have been able to generate life earlier than on the earth.

I.e. Mars' red surface colour may well indicate that it had accommodated oxygen emitting plant life along with liquid surface water long before its core was blown out.

All of Mars' water will no doubt have found its way into the planet's internal voids and is occasionally released only under heavy meteorite impact.

Mars is by far the most interesting planet in our solar system, because:
if it is a hollow iron planet,
if it has had liquid water on its surface,
if it has been host to oxygen emitting plant-life,
if its water has found its way into the planet's interior,
It is highly likely that the kinetic energy in Phobos will keep the water liquid and potentially relatively warm. This means that:
a) it may contain oxygen internally, and
b) it may contain life internally, and
c) it may be possible to occupy its internal voids

As can be seen in Fig 4 the pressure/density of gas increases exponentially under gravity and inversely proportional with radius indicating that the vast majority of the mass in a gas planet must be at its centre.

Pluto's principal moon; Charon, is so large (>12% of the Pluto's mass) it is pulling Pluto into a local orbit (Fig 5) and is the reason why its effective radial modifier (Δ) is greater than 1

For each 'Δ' to be representative, it must reflect the structure of the planet concerned. A reasonable estimate can be made from the average densities of each planet.

By way of illustration, it is possible to estimate for most planets from their relative densities
'ρˢ = Δ.ρᵅ'
Where: ρᵅ is the average density and ρˢ is the surface density

Using this argument for the planets in our solar system with moons, the surface densities of each are estimated as follows:

Given their respective surface temperatures and despite the unknown nature or composition of each planet's inner material(s), with the exception of Mars and Pluto, each is representative of its expected surface materials.

Table 1 shows the relevant properties of the bodies in our solar system: