The following is not an in-depth explanation of every aspect of thermodynamic theory, you can find that in any of the publications referenced at the bottom of this page.
It is our attempt to clarify the basics, assemble the principal formulas and simplify their use.

Whilst thermodynamic calculations can be made exceptionally complicated, the accuracy of your results will be totally dependent upon your control over the design, manufacture and operation of the equipment and environment involved and may not therefore be much more reliable than a measured simplistic approach.
Most practical problems can be solved by answering the following simple questions:
1) How much work do I want out of my process?
2) How much energy do I have to put in to get it?

You will find numerous descriptions and explanations for the three laws of thermodynamics, (many of which may appear confusing), but they can be simplified as follows:

The First Law of Thermodynamics: Conservation of energy
I.e. energy can never be lost, it can only be transformed or transferred.

The Second Law of Thermodynamics: Heat will not spontaneously pass from a colder body to hotter body
I.e. a high-energy source (hotter body) will spontaneously lose energy to a low-energy source (colder body) but you must add work if you want energy to transfer in the other direction (up-hill so to speak). This law essentially states that it is impossible to create energy from nothing.
This law also claims that energy can, and in fact is, lost by a system to its surroundings but that the reverse cannot happen i.e. an increase in disorder is an inevitable feature of time.

Whilst the above laws apply to all forms of energy, the theory (calculations) of thermodynamics is all about the transfer or conversion of heat energy. Therefore thermodynamics does not normally apply to unheated systems.

Thermodynamics is a frightening subject for many who have not been exposed to it before.
In this sub-section, CalQlata will try to explain it as simply as possible.
First of all, we will clarify a few points you may find useful when dealing with the formulas:

The principal energies, all of which have the same units (J, cal, N.m, lbf.ft or Btu), in any system are as follows:
Notes:
Remember; the 'system' does not include its 'container'
Lower-case symbols for energy (e.g. s) refer to specific values (e.g. specific entropy) i.e. energy per unit mass
Upper case symbols for energy (e.g. S) refer to total values (e.g. entropy) i.e. specific energy x mass

Heat Energy (Q):
The energy in a system from heat (cv & cp) at 1 atmosphere, at the start or end of a process.
It does not include kinetic, magnetic, chemical, gravitational etc. energies
Nor does it include the effects of pressure resulting from containment at this temperature
{Q = Cv x Ṯ}

Internal Energy (U):
The energy in a system that is not imposed by its surroundings and is available for work (W);
'U' includes 'Q' plus other inherent energies in the system kinetic magnetic, chemical, gravitational, etc., e.g. the kinetic energy of a fluid passing through a pipe
but it does not include potential or other energies from, or induced by, its surroundings
{U = Q + Uᴷ + Uˀ + etc.}

Potential Energy (Uᴾ):
The energy in a system induced by its surroundings and is available for work
Potential energy includes the effects of: pressure (p.V or ρ.g.d.V); gravity (m.g.h); etc.
where:
p = pressure induced by a container, such as a pressure vessel or pipe wall as a result of 'U'
V = volume of the system (i.e. the internal volume of its container)
ρ = density of the fluid in its pressurised state
d = depth of the fluid
h = height above a datum (of the system)
m = mass of the system
g = gravitational acceleration

Enthalpy (H):
The sum of internal energy and potential energy
{H = U + Uᴾ}

Total Energy (E): The sum of all the energies in the system and its surroundings
E = H - W + Uᴱ

U₁ internal energy can be calculated from the known properties of a system;
temperature, mass, specific heat capacity, etc.

Q₁ if no heat energy has been added to the system at the start of the process; Q₁ = 0⁽¹⁾

U₂ internal energy is the sum of the internal energy at the start of the process and the heat energy added during the process, minus the energy expended in work and that lost to the surroundings;
U₂ = (U₁ +Uᴾ₁ ) + (Q₂-Q₁ ) - (W₂-W₁ ) - (Uᴱ₂-Uᴱ₁ )

W₂ mechanical work generated by the system during a process, e.g. on a piston, can be calculated as follows:
W₂ = force x distance (N.m), where 'force' is the pressure behind the piston multiplied by its area and 'distance' is the sum of the distances travelled by the piston during the process. Divide W₂ by the duration of the process (t) and you will have the power (p) generated in the system by the process; p = W₂ ÷ t
Work (W₂) comes only from heat energy (Q₂)
If no work was done during the process (Figs 1 & 2) then W₂ = 0

Q₂ heat energy is the power (J/s or Btu/min) added to the system over the duration of the process, which can be calculated by:
Q₂ = power x time
or from the modifications made to the system during the process:
Q₂= specific heat capacity x mass x temperature (J/kg/K x kg x K)
Any part of 'Q' that is not converted into 'W' will have been lost to Uᴱ and/or added to U₂

E₂ the total energy is the sum of all the energies in the system and its surroundings;
E₂ = H₂ + Uᴱ₂
If Uᴱ₂ is unknown or zero, then E₂ = H₂

Because we don't always know the energy of the surroundings, and in most cases we are primarily interested in what happens to the system at the end of a process, its performance is usually calculated using the difference between energies rather than the start and end energy values. This difference is identified in the equations by a 'δ' in front of the energy symbol⁽²⁾,

The system is the matter containing the energy under consideration everything else is the surroundings.
For example; in an autoclave, the steam (or heated gas) is the system. The pressure vessel and its environment are the surroundings.

Isolated System is a system that can lose neither heat nor mass to its surroundings.
Therefore; Uᴱ can be ignored

Closed System is a system that can lose heat energy to its surroundings but not mass.
Therefore, Uᴱ₂ & Uᴱ₁ will need to be considered in your calculations. 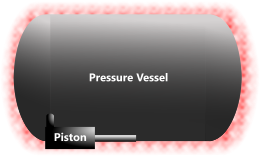 Open System is a system that will lose mass and heat energy to its surroundings, it is therefore unlikely that you will be able to identify Uᴱ₂ & Uᴱ₁ . δUᴱ will therefore have to be subtracted from known values, i.e.; δU, δQ & δW in order to find the efficiency/losses in the system.

Steady-Flow is a system through which a fluid is flowing, the condition of which does not change with time; i.e. the fluid does not lose energy to its boundary (e.g. container).

Unsteady-Flow is a system through which a flowing fluid interacts with its boundary (container) in that it loses energy through heat, friction, turbulence, etc. 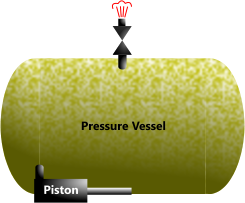 A Reversible process is one that can follow a full cycle and be returned to its original state, i.e. U₂ = U₁, however, unless a process is 100% efficient some additional energy will be required to achieve this reversal.
In an isolated system (Fig 1) this reversal can be achieved with little additional energy because, apart from the energy expended in work, all the added heat energy (δQ) will remain within the system throughout the process.
In a closed system (Figs 2 & 3), energy in the form of heat will be lost to its surroundings and this energy will have to be replaced if the process is to be returned to its original state.

Irreversible is a process during which it will be impossible to return the internal energy to its initial condition, irrespective of the energy added to the system; i.e. U₂ ≠ U₁
All processes in open systems are irreversible (Fig 4).

The following universal relationships apply to polytropic processes and ideal gases in which;
p.Vn = a constant:

In these formulas, J is the mechanical equivalent of heat which can be ignored if you are using metric units as J = 1
If you are using Imperial units, you will have to allocate a value to J based upon the units you are using.

in an adiababtic, isentropic, reversible process Q² = Q₁ as no heat is lost to the surroundings, so δQ = 0
U = Q - W is only valid for an adiababtic, isentropic system or one where no heat energy is lost to the surroundings, otherwise these energy losses must be included in the formula: U = Q - (W+losses)
in a constant volume process no work will be done as work requires physical movement (N.m), therefore W² = W₁ & δW = 0

In order to simplify the calculation, we may assume a 100% efficient, Adiabatic and Isentropic process, i.e. zero losses and fully reversible.

In fact, in terms of 'fuel-energy to work' conversion, most steam engines are significantly less than 40% efficient so coal consumption in the above engine is likely to be closer 2.7 tonnes per hour than 1.073.

The available energy in the process comes from the mass of water (30kg), reducing the water quantity will reduce the energy available for work and the pressure in the piston, but it will also reduce the energy required to achieve the design temperature (450°C).

The following will give you the greatest efficiency improvements:
Maximise water mass for the pressure carrying capacity of your pressure vessel
Use a fuel that maximises energy recovery rate (minimises waste)
Maximise heat transfer in heat-exchanger
Minimise heat loss through vessel insulation
Exhaust back into the system (where possible)

Whilst the above calculation may look over-simplified, such an approach will produce results very close to reality, given the unknowns and inefficiencies in a steam engine. A more complicated approach (i.e. detailed/in-depth calculations for each stage of the process) may provide more accurate results, but not necessarily more reliable.

p.V = n.Rᵢ.Ṯ is a well known and recognised formula for determining the properties of a gas.

There are, however, a couple of alternative ways to calculate it from the potential energy in an atom's proton-electron pair population:
p = ρ.PE₁ / mM.Y = T̲.mₑ.ρ / X.Y.mM = kB.T̲.ρ / mM
where: 'ρ' is the gas density, 'PE₁' is the potential energy in the proton and the electron in shell-1 and 'mM' is the molecular mass:
PE = mₑ.vₑ²
vₑ = √[T̲/X]
which provides exactly the same result as the PVRT calculation method but eliminates the need for moles and the ideal gas constant.

p/ρ = KB.Ṯ
p/ρ = PE₁ / m.N.Y
where: n is the number of moles; Ṯ is the gas temperature; R is the gas constant; V is the gas volume; m is the atomic mass; N is the number of atoms in the molecule; PE₁ is the potentential energy in the innermost (electron shell 1) proton-electron pairs in the atom.
Both of which give exactly the same result.

Therefore:
R₁.Ṯ = p/ρ (m²/s²)
which can be helpful when dealing with gas calculations.

Coefficients of expansion (linear; α, area; α' and volume; α") are amounts of growth expressed in terms of a fraction of original length (in a given direction) per degree of temperature change.
For example; if a material with a coefficient of expansion (α) of 0.00002358/K in a given direction is heated by 48K, at the increased temperature that dimension will be;
L x (1 + 0.00002358 x 48)

The following table contains the relationship between material lengths, areas and volumes as a consequence of alterations to its temperature:

For a material that has the same coefficient of expansion in all directions:
α' = α x 2 and α" = α x 3