A Newtonian (and Coulomb) model of the atom. 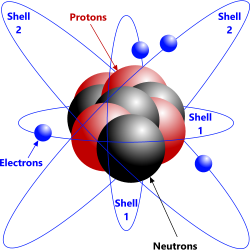 The purpose of this study is to answer the following question:
1) Can Isaac Newton's laws of orbital motion be used to explain the atom?

The answer to the above questions is yes, albeit input from Coulomb, Rydberg and Planck was required to complete it.

In these calculations, the electron and proton in an hydrogen atom have been treated as a satellite orbiting a force-centre.
The purpose of these calculations is to see if Newton's laws of motion can be applied to atoms.

The following Table compares the results from calculations using Newton's laws of motion in combination with Coulomb's law between the earth and a hydrogen atom under gravitational or electrostatic attraction.

The above results reveal the following:
1) An eccentricity of '0' (circular) for the orbital pathh is necessary for compliance with 2) below
2) F̌ (gravitational) = F̌ (electrostatic) x φ
3) Ř = Ř for all three subjects (i.e. the earth and the hydrogen atom under either force), which means that all three orbits comply with Newton's and Coulomb's laws.

That the above calculation technique is exactly the same in all three scenarios proves that Newton's laws of motion do indeed apply to atoms as long as Coulomb's electrostatic charge is included.

You may have noticed that the ratio between the gravitational and electrostatic coupling forces (F̌) in the above atom is 4.4074E-40, which is exactly equal to the force ratio constant; φ

Comparison Between Planetary and Atomic Orbits

In addition to the above proof of Newton's laws when applied to the atom, comparison calculations were carried out between planetary and electron orbits, all of which use identical theories and therefore strengthen the claim that Newton's laws apply to atomic structures.

Rydberg: A standard atom of protons and orbiting electrons

As can be seen from the above table, applying universal factor; 'φ' to Rydberg's atom allows us to use Newtonian mechanics to define the properties and behaviour of sub-atomic particles.

Using Henri Poincaré's formula EN = m.v² to convert the above properties to energies:

As can be seen from the above Table the energies calculated using Newton's formulas replicate the results from Rydberg's, noting that the universal factor 'φ' is required for the Planck atom.

Newton's laws are universal, i.e. they apply to all orbiting systems irrespective of size. However, whilst you can apply Rydberg's rules to planetary systems (by multiplying the gravitational coupling force by 'φ'), you must first assume that they both carry a charge. You must also assume that the charge held by the sun is equal to the combined charge held by all of its orbiting bodies. To the author's knowledge, no such charge has been identified in the earth.

This paper should be read in conjunction with:
Constants
Laws of Motion
Planetary Spin
Rydberg Atom
Planck Atom
G
The Atom