'Partial pressure' is the term used to describe the pressure of an individual gas within a mixture of fluids. A mixture of fluids means more than one gas and/or a liquid, all of which are equally and evenly dispersed in the same vessel or space. This relationship remains true only for gases that do not chemically react with the other fluids, i.e. at relatively low temperatures.

At the beginning of the 19th century John Dalton discovered that any gas will occupy and fill a space entirely as though no other fluids were present. Even if the volume of the container is such that in order to fill it the gas would need to settle at a pressure less than ambient, it would do so irrespective of the number of molecules involved. Except for the influence of gravity, the effect of which will be negligible in containers just a few metres high, all gases will always distribute evenly. This phenomenon is known as Dalton's Law.

Whilst all gases and some liquids (e.g. tea and milk) can and will fully occupy their space evenly and equally, some liquids will not; such as oil & water, which do not readily mix and will settle in layers (strata) according to density.

Irrespective of whether or not a container is open or closed, a liquid will always settle to the lowest possible level in it, whilst gases will not. Gases will spread out evenly to fill a closed container or behave as if an open container did not exist. 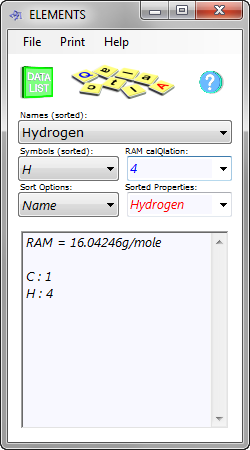 Gases cannot become saturated when mixed with other gases
Liquids will become saturated if too much gas is entrained
When entrained in a liquid, all gases will uniformly occupy the same space as the liquid until saturation occurs, at which point gas bubbles will appear and gather together (if contained) or escape (if uncontained) at the top of the liquid. The partial pressure of gas entrained in a liquid will not necessarily be the same as the pressure of the gas at the top of the container.

CalQlata has generated a theoretical analysis of all the gases in the earth's atmosphere. It is for systems such as this that partial pressure calculations are most useful. The calculation of partial pressures enables us to define exactly how much of each gas exists at any particular altitude and the altitude of its ceiling. When we say ‘exactly’, we actually mean for a global average, as the weather generates localised variations in pressure and temperature.

E.g. fluid pressure tests such as that described in the API specification 16C for choke and kill equipment where you are required to perform the test using a specific mixture of gases and liquids at high pressure and temperature. In order to ensure that you use the correct quantity (mass) of each gas in your test you must first calculate the partial pressure of each at the the test temperature (see Example Calculation below).

CalQlata believes that a correct percentage between mixed gases must be based upon mass as opposed to volume, which varies with pressure and temperature. 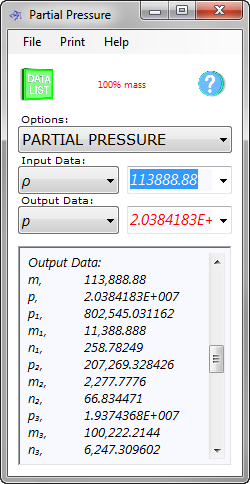 Partial Pressure asks you for a density (ρ) and a volume (V) of the pressurised mixture, from which the calculator will determine the total mass of the mixture.

You then enter your percentages (%₁ to %₁₂) and relative atomic (or molecular) masses (RAM₁ to RAM₁₂ - CalQlata's Table of the Elements database will calculate these for you: Fig 1) for each substance and the output data will provide you with a total pressure (p). All you do is modify the density (ρ) until you achieve the correct pressure (p).

The results from the partial pressure calculator are exact and accurate in accordance with the input data you enter.

You will find further reading on this subject in reference publications(3, 12 & 35)