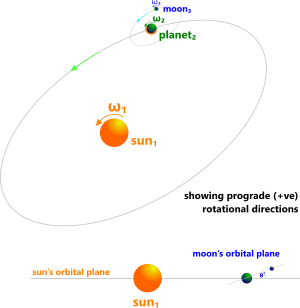 Planetary spin refers to the angular rotation (spin-rate) induced in a celestial satellite in orbit around a force-centre, such as a star or planet.

The body being investigated is a satellite
(e.g. as sun, planet or moon)

Its force-centre is a galactic star, solar sun or planet

Its secondary satellite(s) is a planet or moon

What Is Planetary Spin?

It is the spin rate of a force-centre or satellite. It has both [angular] velocity and direction.

Whilst it is not part of Newtonian mechanics, the energy that generates spin is found in Isaac Newton's laws of motion.

What Are Spin Energies?

Spin energy is the rotational energy inducing spin in a satellite.

Assuming no other [energy] influences, gravitational energy will ensure that a satellite orbiting a force-centre will always present the same face to its force-centre causing it to spin at an angular velocity (ωₒ) with the same period as its orbital period

This is the rotational energy induced in a satellite due to its own orbital kinetic energy, which varies with its distance from its force-centre according to Isaac Newton's inverse-square relationship. This energy will cause a satellite to rotate in the opposite direction to ωₒ

Moons or No Moons!

Apart from Mars, all the planets in our solar system possess spin energy from secondary satellite(s) at least a thousand times greater than that induced by the satellite's own kinetic energy. This is why Venus rotates in the opposite direction to the other planets; it has no secondary satellites to overcome the influence of E₁

Mars is a very special case because it appears to be hollow. The influence of its secondary satellites is only 2.5 times greater than E₁. Phobos actually rotates faster than its force-centre (Mars), which must be due to Mars' unusually low 'Δ' value

Mercury & Venus have no moons, so we shall calculate the spin in both planets (Fig 2 shows the calculation for Venus) 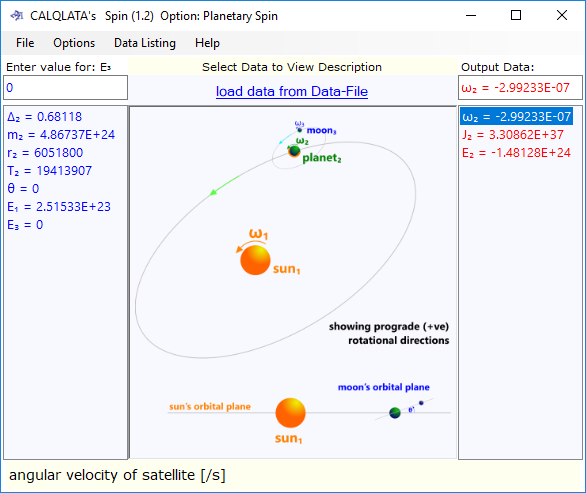 Neptune is a little more complicated as it has many moons, three of which orbit in the opposite direction (retrograde) to Neptune's own orbit (prograde) 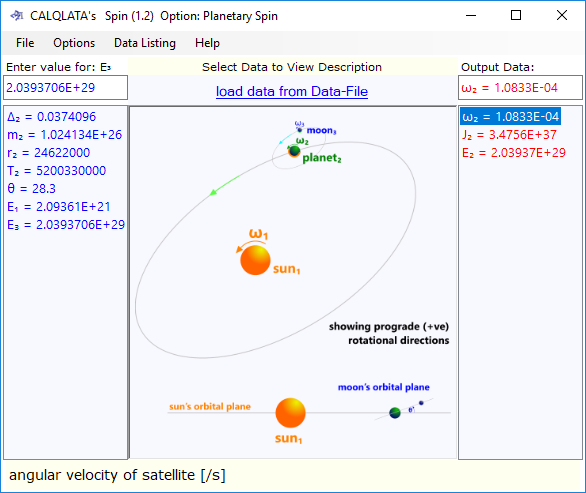 The delta value of any satellite or force-centre is the factor that must be applied to its radius in order to accurately define its polar moment of intertia, which can be used to define its structure using Core Pressure theory

m₂: mass of the satellite

r₂: volumetric radius of the satellite

θ: angle between the orbital plane of the satellite and that of its secondary satellites [degrees]

E₁: the energy induced into the satellite by its force-centre. This value may be obtained from CalQlata's Newton calculator from a calculation of the satellite itself

J₂: polar moment of inertia of the satellite

This calculator is as accurate as Newton's own laws of motion