This web page is an explanation by Keith Dixon-Roche of gas planets and how they differ from stars and other planets.

Having established that planetary spin generates internal [frictional] heat, it is now possible to establish the real origins of the stars (including our sun) and the gas planets, which are actually stars with a lot less energy.
The difference between the earth and the gas planets is that the earth has acquired insufficient moons (galactic comets) to generate the internal heat necessary to melt its crust. If, however, the earth did trap another moon of sufficient size, the earth's crust would melt or heat up to a point whereby life on its surface would not be possible in the form we know it today.

The surface of Jupiter (density 1326.22 kg/m³) is actually cooler than the surface of Saturn (density 687.123 kg/m³) because Jupiter's planetary:lunar mass ratio is lower than Saturn's. Whilst Jupiter has more lunar mass than Saturn, it also has considerably more planetary mass to heat up.
In fact, all the gas planets (including Neptune and Uranus) have acquired sufficient lunar-mass to generate the internal [frictional] heat required to melt their surface crusts. They are, however, too far away from their force-centre (the sun) to add atmospheric warmth through electro-magnetic radiation.

It has already been established that stars cannot possibly be made from natural hydrogen. 99.3% of all natural hydrogen comprises lone protons (H+). No matter how hard you try to push two of them together, they will never unite by fusion, due to their similar electrical charges.
Moreover, if stars are made from lone protons:
How can they emit electro-magnetic radiation?
Why can we see them?
Where does their radiated heat come from?
Lone protons cannot trap energy and they cannot emit it, and fusion does not generate energy, it uses it. So the currently accepted model for the stars cannot be correct.
I.e. stars are not made from hydrogen and they are not creating elements from fusion

The Universe (how it works)

On the other hand, if stars are made of the same matter as all other celestial bodies, but have acquired planetary sized satellites, together with galactic force-centres they will be able to generate sufficient heat (electro-magnetic energy) to gradually convert the proton-electron pairs in their atoms to neutrons. Ultimately leading to a surface of proton-electron pairs (hydrogen atoms) that can emit electro-magnetic energy. And if we use Keith Dixon-Roche's mathematical model for the atom, we can reproduce its colour.

Therefore, all celestial bodies comprise the same matter, originate from the ultimate-body (Big-Bang) and have the same age; that of the current universal period. The rocks we age are simply rocks that were made that long ago either on earth, or in the case of meteorites, how long ago they were made on the planet that was once orbiting in the asteroid belt or by its killer (a galactic comet).

The neutrons generated in the stars provide the energy to ignite the next 'Big-Bang'.

The above model explains every celestial body; where it came from, how old it is, why it looks and behaves the way it does, etc. 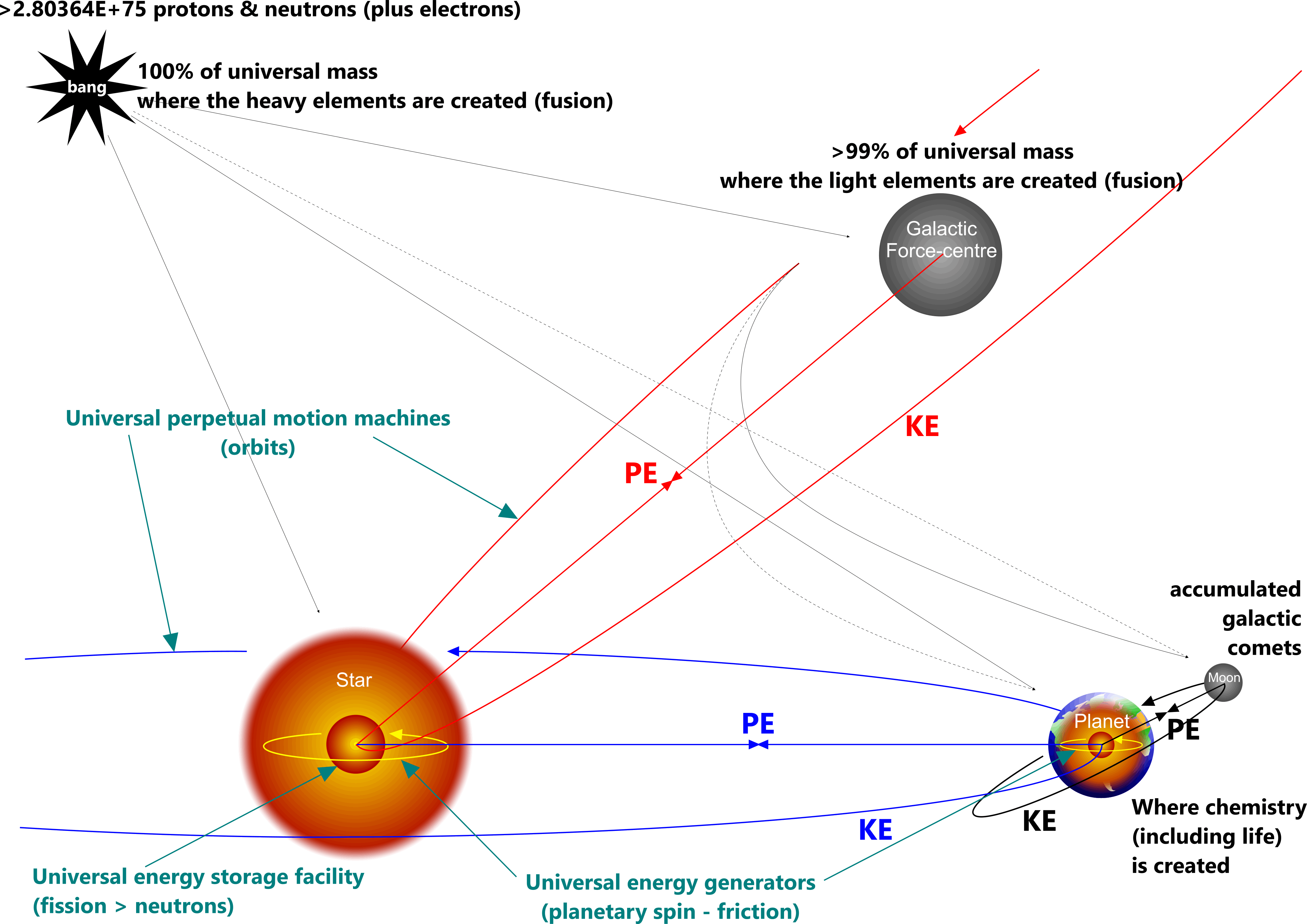 How the universe is made, how it generates energy and where it stores it

In the above form, the universe can repeat itself eternally with no outside help and yet conform to all three laws of thermodynamics.