Elements is an interactive database and active periodic table of nature's atomic elements.

Elements includes an active periodic table (Fig 1), which is accessed by the 'image switch' (CalQlata Logo) at the top of the program window (see How They Work). It displays all the 'Sort Options:' properties (where available) for the elements in the database (1 to 101). Click on any box in the Table to select the element and list its properties in the 'Data Listing' window. 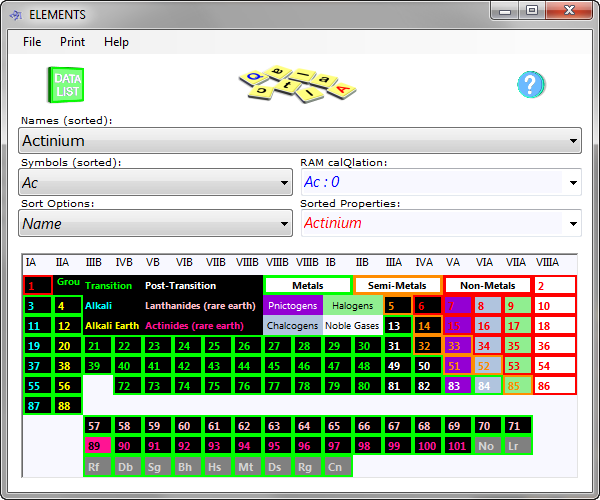 An atom is a general term used to describe a nucleus (comprising protons and neutrons) surrounded by electrons.

An element is defined by the number of protons in its nucleus, which is also known as the atomic number of the atom.

Of the 92 naturally occurring elements;

There are eleven non-metals, ten semi-metals and all the rest are metals

About 250 years ago, an 'element' was understood to be nature's smallest component. The atom was defined during the 19th century (e.g. Dalton to Thompson). This too was broken down at the beginning of the 20th century (Rutherford) into a nucleus of protons and neutrons surrounded by electrons.
It is generally accepted today that these are made from even smaller particles: Quarks (Up & Down) and Leptons, and that there are a number of other sub-atomic particles such as Bosons, Gluons, Photons, Gravitons, Neutrinos, Muons, Tauons, Mesons, Baryons, etc. On top of which we now have; dark mass, dark energy, x-rays, gamma-rays, alpha and beta particles, etc. (see also Sub-atomic Physics).

However, sub-atomic particles have recently been shown to be a figment of our imagination; refer to the various science pages dedicated to the elements in our "Useful Stuff" menu, with particular reference to Physics Discoveries, The proton-Electron Pair and The Atom. The smallest (and only) atomic particles in the universe now appear to be the Proton and the Electron. The Neutron, which can only exist inside and atom's nucleus, is a proton-electron pair united through high temperature.

Given that Relativity and Quantum Theory have at last been discredited, and a Newtonian atom has been conclusively demonstrated, it is now highly improbable that a unification theory will ever be discovered or found necessary to unite atomic and astronomic physics.

All materials contain atoms with missing electrons (+ve ion) or excess electrons (-ve ion) and it is their tendency to correct the situation (collect or shed electrons) that results in chemical reactions.

Oxidisation Nºs are the number of electrons that must be added (+) or removed (-) to create the theoretically perfect element.

Atomic Radius is the radius of the principal (most numerous) naturally occurring element including its electrons.

Atomic elements do not exist in nature in their purest form (except for the noble gases). For example, not all atoms in a lump of iron contain 26 protons, 26 neutrons and 26 electrons. Take a look at the RAM values of every atom, none is an exact multiple of its atomic number. If they were, there would be no such thing as a chemical reaction because all atoms would be stable, and life, the universe and everything occurs only because there are chemical reactions.

A chemical reaction is simply two or more elements in close proximity trying to rectify this particle imbalance (see Ions and Isotopes above).

An atom's electronegativity level (its tendency to collect electrons) will give you some idea of its potential for chemical reaction.

Whilst it is not a 'rule', you tend to find that the higher a metal's electronegativity, the more noble (stable) it will be and the less its tendency to corrode or chemically react.

The lower its electronegativity (the more electropositive) the more likely it will be to corrode or chemically react.

If you bond two atoms together with the same electronegativities, they will form a covalent bond and will be electrically neutral. As the electronegative difference between bonding atoms increases the resultant molecule will become more 'polar' (one end positive and the other end negative, so to speak). For example: the positive acid & the negative alkaline ions join together to make polar (but pH neutral) water, a molecule with one positive node and one negative node making water such a good electrolyte.

Electronegativity increases from the bottom-left corner of the periodic table to the top-right hand corner (excluding the smallest noble gases {Helium, Argon & Neon} which tend to be neutral – they don't bond).

These are the orbital paths followed by the electron partners about their proton partners in an atomic nucleus. They are not elliptical, nor do they comprise sub-shells (s, p, d, f,) as we have been told today. Each shell (which is circular) contains two electrons - except the outermost shell, which can contain one or two electrons. They are described True Atom. There are no valences, when an inner electron is knock from its orbit, all the outer electrons will relocate inwards to ensure electrical balance.

Fission is the splitting of nucleic neutrons into their component parts and thereby releasing their stored energy. This occurs naturally as a result of atomic decay and unnaturally in stars as a result of internal heat generated through spin.
Fusion is the forcing of the nucleus of one atom inside the electron shells of another. This process does not release energy, it requires the input of energy to occur. That energy comes from gravitational force in the core of the universe's most massive bodies; galactic force-centres, the great attractor and the ultimate body.

Radioactive decay occurs over time as atoms gradually release unwanted neutrons - splitting them into their component parts; a proton and an electron - in an attempt to achieve their most stable condition; a neutronic ratio of 1:1.

CalQlata would like to raise a word of caution concerning the property values included in this database.

The data contained in this calculator has not come from physical and/or chemical tests carried out by CalQlata. We have collected this data over a long period from sources we believe to be reliable. CalQlata's reliable sources tend to be published documents, reference books and test-houses. Where possible, we have tried to corroborate the accuracy of this data with at least two additional sources we also believe to be reliable. Where this has not been possible, we have used internet sources for a tertiary check. However, as we have no way of knowing the quality assurance levels of internet websites, we have added the cautionary note '{?}' to such values.

One particularly difficult property to nail down reliably is the boiling point of Silicon, which varies considerably, even between reliable sources (2588K to 3540K). After much deliberation and research, we concluded that the most reliable value appears to be 2873K!

Almost all of the data you will find on the elements will be approximate, irrespective of its source. It is not, for example, possible to define accurately the melting temperature of a material unless you can guarantee its 100% purity along with similar accuracy levels of the test conditions, neither of which are representative of 'real-world' conditions and is not the case for most tests performed on elements to date. Furthermore, heat treatment or physical working can modify the performance characteristics of some metals. This is why specified minimum yield stress (SMYS) and ultimate tensile stress (UTS) are sometimes specified as a range.

We have calculated some of our data where it has been difficult to locate and corroborate using reliable sources but where an accurate or recognised formula is available. For example:

2) Where latent heat information has been difficult to locate using reliable sources, the missing values have been established using the 'Chen' formula(12), which is accurate to between 2% and 6%.

Although we believe that data calculated using reliable variables is more dependable than data from sources unknown to us we qualify such data with the extension: '{Q}'.

If your work requires the use of accurate information, it is always preferable to perform your own tests or at least acquire the information from a recognised test-house.