Structure of an Atom 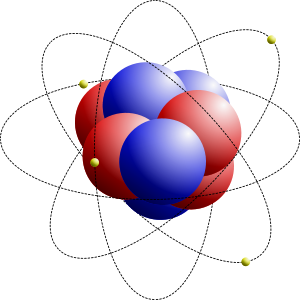 Refer to our page The Classical Atom for more detailed anaylsis of the atomic structure, its forces and its energies.

References are indicated thus: ⁽¹⁾ refers to note 1 at the bottom of this page.

Until recently we understood the structure of an atom as shown in Fig 1. It comprised a number of relatively massive solid balls in its centre (the nucleus), about half of which have a positive charge (protons) and the other half have no charge (neutrons). In addition to which, there are approximately half as many tiny packets of energy or mass that orbit the nucleus, each of which has a negative charge (electrons). Bashing these atoms together causes particles and/or radiation (such as alpha, beta, gamma, etc.) to fly off.

However, this model is becoming a little unclear. For example, it now appears that neither protons nor neutrons are solid balls and they may not even possess mass. In fact they both comprise a number of smaller (or elementary) particles, and electrons are themselves elementary particles as are most of the bits that fly off during impact. 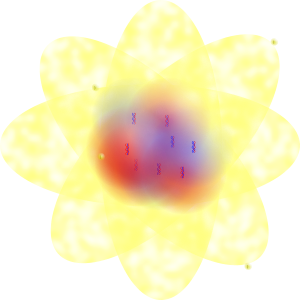 An object with a mass of 1kg at rest (zero velocity) would have zero energy⁽¹⁾ but when travelling at the speed of light, it would have a theoretical mass of zero and an energy of 5.60958915E+035eV⁽²⁾. The mass and energy components of a body can be established by factoring actual speed with light speed in the above equation.

For example: The mass component of electrons is small because they are travelling at very high speed. Protons and neutrons appear much more massive because: a) there are at least three elementary particles (quarks, bosons, etc.) in each, and; b) they are moving very slowly. The elementary particles in each are essentially the same but with different states of energy and therefore travelling at different speeds.

The elementary particles we know about today are listed below:

There is no clear answer as to why such things as charm quarks and muon neutrinos exist, it is simply understood that they do as the empirical evidence appears to indicate as such.

Compound particles are groups of more than one elementary particle bound together by force or opposite electrical charge.

According to CalQlata's scientific author (Keith Dixon-Roche), science appears to have stalled since the first quarter of the twentieth century due to the dissemination of highly speculative theories that have been accepted simply because of the prominence of their proposers. Could it be that a hundred years have been wasted in the search for impossible solutions?

Intimidation appears to have been used to impose such theories; one scientist actually declared to Georges Lemaître that his "science was not very good!" and Henri Poincaré's formula incorrect. Another declared of his own theory; "if you aren't profoundly shocked by quantum physics, then you haven't understood it".

Such comments should be treated with extreme caution; if there is one sure thing about nature, it does not need to rely on complexity for an elegant solution.
In fact, it looks highly likely that Newton's, Coulomb's and Lorentz's theories are sufficient to explain everything within and between atoms, including transition between solids, liquids and gases (see The Atom).

Isaac Newton pointed us in the right direction 300 years ago, but since the early 20th century, the entire scientific community seems to have automatically discounted the suitability of his theories for the evaluation of atoms (quantum theory) and galaxies (dark matter)?

For example:
Relativism is based upon the assumption that Henri Poincaré's formula implies kinematics, but this is not the case, it describes a limiting gravitational energy only.
In the 1930s, a scientist prophesied the existence of dark matter because he stated that Newton's laws of motion predict a great deal more matter in the Milky Way than appears through observation. But we now know that this is not the case.

In fact, an awful lot of guesswork appears to be prevalent in science today; e.g.:
1) Dark matter proven unnecessary
2) A black-hole is a neutron star that spins at the speed of light
3) Newtons laws cannot be applied to atomic physics (untrue!)
4) Quantum mechanics remains unproven after 70 years
5) The need for a unification theory
6) The spin in force-centres and satellites cannot be calculated because no forces induce them
7) Bosons, gluons, quarks, leptons, etc. are claimed to be separate and distinct sub-atomic particles but none have yet been discovered
8) If all the material in the earth is compressed to remove all of the atomic space, it would be no bigger than a grain of sand; whereas it would most likely result in a sphere of ≈543 metres in diameter
10) Classical theory predicts an eccentricity of '1' for the electron's orbit, which has been interpreted as flat elliptical orbits but do not reflect reality
11) s, p, d, f orbital electron grouping uniqueness of electrons in any orbital group remains unproven
13) An electron within an atom cannot be found because it moves around its nucleus in random manner at the speed of light
etc.
And why has it taken 300 years to solve Newton's 'G' and planetary spin theory?

Keith Dixon-Roche has undertaken an alternative view in that Isaac Newton's laws apply to all science and hopes that his work, published on this site will inspire free-thinking scientists to rejuvenate the subject.