The Theory of Spin (in planets and atoms) 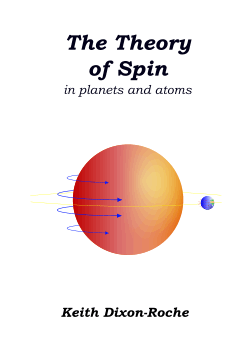 The Theory of Spin

Isaac Newton did not include the laws for planetary spin in his laws of orbital motion. It has therefore remained an enigma until now.
What causes them to spin?

Keith Dixon-Roche can now explain their laws mathematically, and it should come as no surprise that Newton's orbital laws are responsible for generating spin. The surprise comes, in the revelation that spin is responsible for the internal heat within, and magnetic fields generated by, all the planets and stars.

This book is written in way that anybody with a basic understanding of maths should be able to understand and use the formulas. It would be a good idea, however, to have a reasonable understanding of the laws of orbital motion before attempting to use them.

This is the first book ever to explain how the sun, and all the stars, generate their energy and why gas planets exist.
And in case you were wondering, the sun was not born from hydrogen nor does it generate its energy from fusion. Moreover, when the earth was young it was cold!