The Mathematical Laws of Natural Science 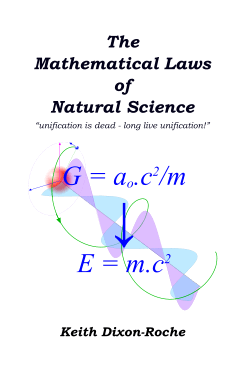 This book is a compilation of all Keith Dixon-Roche's work on atomic and astronomic physics explaining in narrative and mathematical terms exactly how the universe, and everything in it, works.
Genuine science is really very simple, exactly as you would expect. And, apart from Max Planck's work, it was all known before the beginning of the 20th century.
Despite it flying in the face of convention, nobody has yet been willing or able to disprove it.
All of Keith's theories are fully supported, both mathematically and logically, and require no unification theories; one theory fits all!
In case you were wondering, Newton and his compatriots were correct;
Einstein & Bohr, together with almost every other 20th and 21st century scientist, were (and are) wrong.

It took Keith only two and a half years to solve all the scientific problems of the universe, from atomic particles to the 'Big-Bang', all that is, except the molecule, which he claims to know how to solve but ...
... having received in return for his work everything from apathy, through fear to outright hostility from scientists, politicians and industrialists, together with
... "nobody will help you but you mustn't stop"
he has decided to leave the molecule up to you!

But what does it all mean you may ask?

It is now possible to ...
... actually, genuinely clean up the surface of our planet and solve all of mankind's problems at a stroke:.

... generate super-efficient (>1000%), clean and free energy from an inexhaustible supply here on earth that requires no processing or mining. Eliminate national power stations and their distribution systems, batteries, solar cells and wind turbines. One-metre of the earth's crust contains enough energy for the human race for more than 1E+14 years, and it is just lying around in your garden!

... make perfect, cheap medicines that can be tailored to the individual in minutes from a computer terminal - no more testing or experimentation!

... make transport and travel virtually free, both here on earth and in space - quiet, safe, at any speed (faster than electro-magnetic energy). A vehicle that can quietly and quickly overcome earth's gravity. Refuelling that can be obtained from any planet. Zero exhaust or noise.
E.g.; there is enough natural energy in a small pebble to fuel a family car for well over 50 years.

And it would cost no more than a few million pounds (Stirling) and three to four years to demonstrate most of it.
Imagine that; free, clean energy and cheap, perfect medicienes for every person in the world at less than one-millionth of what is currently being spent on the annular running cost of the Hadron Collider, which is doing no more than chasing fantasies.
But nobody wants it ...
... which is the reason this will be Keith's last book.

Below is displayed the list of chapters and the introduction to the book.

Beware, if you read this book, you will realise that everything being taught in our schools and universities related to physics, and all you read, see and hear in the media is myth, and has been for well over a hundred years.
Science is unbelievably simple. It could be taught in schools. You don't need a university education to understand it. And it doesn't need to rely on intimidation, e.g.; "if you aren't profoundly shocked by Quantum Theory then you haven't understood it"!!!
This is the reason CalQlata is offering a prize for anybody, from any walk of life, that can disprove just one of Keith's discoveries.

Some scientists may realise that they have got it all wrong, but they are afraid to stand up and say so.
All we (here at CalQlata) hope is that it doesn't take another 2000 years to get science back to where it should have been hundred years ago.

This paperback book has been published through Amazon Books and can be acquired from their website. The following Table provides direct links to the relevant Amazon webpage for each version of the book.