This atomic model represents the culmination of the work carried out by Keith Dixon-Roche on Isaac Newton's laws of orbital motion. It requires no obscure theories such as Relativity or Quantum Theory and needs no unification theory, but It can be mathematically verified.

The [only] two fundamental components in the universe are the proton and the electron; there are no other particles (Fig 1; see neutron below).

The proton constitutes 99.3% of all natural hydrogen gas (H⁺). It does not move unless forced to do so by impact or magnetism. Lone protons cannot absorb or transmit electro-magnetic energy. Two adjacent protons can never be adjoined (in viscous form) because their like (positive) electrical charges will always repel (Fig 2).

The electron is a much smaller particle (than the proton). It possesses perpetual kinetic energy absorbed and converted from surrounding electro-magnetic energy. Its velocity varies with the amount of electro-magnetic energy absorbed. A lone electron will travel in a straight line unless impacted by another electron or diverted by magnetism. A moving electron possesses the same angular velocity it had when ejected from its latest proton-electron partnership. In reality, electrons never actually impact, their like (negative) electrical charges will always repel.

When a proton detects a passing electron, their dissimilar charges will attract. However, the perpetual motion in an electron will never allow them to unite. The electron will simply orbit the proton. Because the electron provides its own kinetic energy, its orbital path will be circular. They will then have become a proton-electron pair (Fig 3).

As more heat (energy) is absorbed by the orbiting electron, its velocity will increase, causing its orbital radius to reduce (Fig 4), exactly as Newton described in his Principia. If sufficient energy is absorbed by the proton-electron pair, the proton and its orbiting electron will unite to be come a neutron, trapping its contemporaneous energy within. The neutron's electrical charges will be identical and opposite, cancelling out each other because electrical energy is shared, but their magnetic charges will be added together because magnetic energy accrues. The orbital radius at which this occurs is the neutronic radius and the velocity of the electron will be that of electro-magnetic radiation (c). This is the true meaning of E=mc² 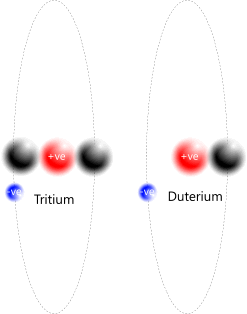 An atom with an atomic number greater than 1 can only be created from Deuterium and Tritium. Natural hydrogen (H & H⁺) cannot be combined into larger atoms because of the coupling ratio.

The proton-neutron collection of any atom is called its nucleus.

To create a larger atom, you simply push the nucleus of one atom inside the innermost electron shell of another atom. This can only occur if sufficient force is generated to overcome the repulsion from competing electron charges and the process is called fusion.

A proton-electron pair is a negative charge orbiting a positive charge both of which have magnetic charges, just like a motor or generator. In this way, the proton-electron pair can generate and emit electro-magnetic energy (Fig 6). This is what we see and feel as light and heat and is the means whereby energy is transferred (between electrons). 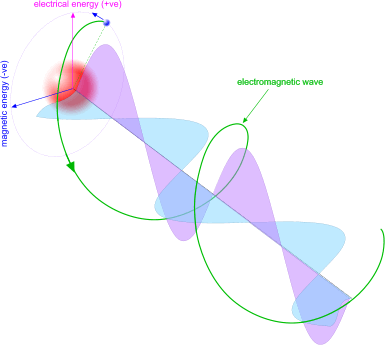 Important Note: When you select an atom for calculation, the atomic number will be updated but the RAM value will not. You must make sure that the appropriate RAM is entered for the isotope required, otherwise, some of the results will be incorrect.

You may use any units you like, but you must be consistent.
This is why we recommend sticking to the basic five energy-related units for all properties:
Mass (kg or lb); Length (m or ft); Time (s); Electricity (C); Temperature (K or R)

# Please note when using Imperial units: lbf.ft/s² is generally referred to as the 'ft-lbf'. If you multiply these results by 'g' you will have the result in 'ft-pdls'.

Whilst ATOMS' default values are provided in metric units; the calculator's Help Menu offers conversions for the above constants in the associated Imperial units.

ATOMS is applicable to all atoms, at any temperature

ATOMS is as accurate as the input data provided