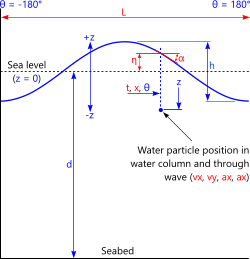 This calculator is exactly the same as Waves, but with the additional facility for converting wave velocities and accelerations into forces on a structural member, both through the wave and through the water column (top to bottom of member).
Waves+ is not intended as a supplement to Waves, as both calculators give the same results for water particle movement.
Waves+ is only required if you need wave forces due to water particle movement.

The hydrodynamic theories in the Waves+ calculator are identical to those described in Waves, the support for which is provided in its technical help page.

This calculator uses Morison's hydrodynamic loading formulas for drag and added mass to convert water movement to horizontal and vertical load on a structural member throughout its depth. 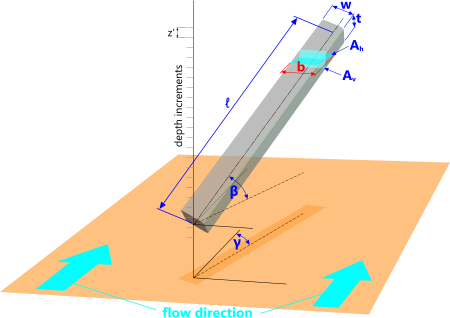 The wave load is applied both horizontally and vertically along the length of a structural member of constant cross-section.
Due to the infinite range of potential cross-sections, CalQlata has left it up to you (the user) to enter the horizontal and vertical cross-sectional areas (Aₕ & Aᵥ) and projected width (b) for the member at the preferred inclination and orientation. However, Waves+ does calculate these values for rectangular and elliptical members should you wish to use them.
Some useful tips in calculating these values are provided below (Fig 2):

In order to view the forces calculated, you need to open the 'Data' menu and select submenu item 'Forces: z,θ; Fx,Fz'

You may use any units you like, but you must be consistent. Also, remember that the results you get will be in the same units you entered.

The following input data applies to the instantaneous water particle properties list in the output data:
d = water depth from seabed to sealevel (flat-water)
h = wave height from trough to peak
p = wave period from -180° to +180°
z = distance from sealevel (-z = below and +z = above)
θ = angle through wave; -180° ≤ θ ≤ 180°
cur = speed of current in the direction of the wave
g = acceleration due to gravity

The output data for the forces are to be found via menu item: 'Data>Forces: z,θ; Fx,Fz'.
The individual loads presented apply only to the increment z',θ displayed in the list. The total [horizontal/vertical] load on the structural member is the sum of the forces listed.

The applicability of the (water particle) properties is as described (for each theory) for the Waves calculator.
The forces calculated in Waves+ apply to a single structural member of constant cross-section configured at any inclination and/or orientation.