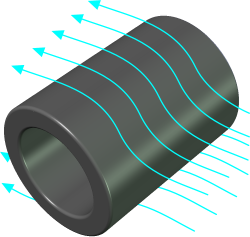 When fluid flows over a stationary or moving body, there are two distinct forces trying to slow it down:

1) The force created by the interface resistance between a fluid and the surface of a body. This effect is called 'Drag', which is defined by a 'Drag coefficient' (< 1.0) and is dependent on the relative velocity between the fluid and the body. The combination of body surface finish (roughness and/or tackiness) and fluid surface tension (its resistance to shear) will together with the shape of the body define this fluid force.

2) The force required to displace a volume of fluid by a body moving through it. In this case, the displaced fluid is assumed to occupy a volume at least equal to the body displacing it and is called an 'Inertia coefficient' (> 1.0). This force is dependent on the relative acceleration between the fluid and the body.

A force imposed on a body by a flowing fluid is due to, and depends upon, the above interactions.

The fluid force due to drag comes from the slowing down of the fluid directly in contact with the body as a result of skin friction and the fluid's surface tension. Drag increases in proportion to the body's surface roughness. There would be no drag at all on a body if it was totally frictionless (impossible), i.e. the coefficient of friction would be zero irrespective of its shape. Once one accepts that there is no such thing as a frictionless surface, the shape of the object (facing the fluid flow) and its position relative to an adjacent boundary will directly affect its drag coefficient.

a) The Drag coefficient for a pointed body with a small included angle and a highly polished surface will be somewhere between 0.2 and 0.5

b) The Drag coefficient for a round body mid-stream and a normal surface will be somewhere between 0.5 and 0.7

c) The Drag coefficient for a round body positioned less than one diameter away from a solid boundary and a rough surface will be somewhere between 0.7 and 0.9

d) The Drag coefficient for a flat body mid-stream and a rough surface will be somewhere between 0.9 and 1.0

e) For wave 'slam' (a boundary condition where the body passes from air to water), it is normal practice to increase this value to between 2.0 and 5.0 to allow for dynamic effects. 2.0 should be used for a glancing blow and 5.0 for maximum impact conditions.

a) The Added Mass coefficient for a pointed body with a small included angle and a highly polished surface will be somewhere between 0.3 and 0.4

b) The Added Mass coefficient for a round body mid-stream and a normal surface will be somewhere between 0.4 and 0.6

c) The Added Mass coefficient for a round body positioned less than one diameter away from a solid boundary and a rough surface will be somewhere between 0.5 and 0.8

d) The Added Mass coefficient for a flat body mid-stream and a rough surface will be somewhere between 0.7 and 0.9

3) Where a body is moving relative to a fluid, you need to include the total displaced mass (added mass plus actual mass of displaced water) multiplied by the acceleration of the body in your force calculations.

You enter only the 'Added Mass' coefficient in the fluid forces calculator, which will automatically convert this value into an 'Inertia Coefficient' by adding 1.0 to it in the calculations.

The above values are provided for guidance only. Accurate values should be calculated using tried and tested methods or CalQlata's Added Drag program (see Data Import Facility below).

CalQlata's Fluid Forces calculator addresses forces on:
a) a body passing through a fluid,
b) a fluid passing over a body, and
c) a combination of 'a' and 'b' according to the equations established by Morison

You should apply suitable additional factors to Cd and Ca that take account of significant surface roughness and/or relative proximity of the body to a surface preventing free-flowing orbital fluid, either of which can significantly increase their values (see CalQlata's Added Drag calculator).

Important: You should remember that the 'Force' results will be in the form of 'mass multiplied by acceleration' {e.g. Newtons}. As such your input mass values {e.g. kilograms} must not include the effects of gravity.

In a vacuum, a falling body would continue to accelerate, increasing its velocity indefinitely or until impact. This is not the case for a body falling through a fluid (a gas or a liquid) under the influence of gravity. When the force of the falling body due to its mass and gravitational acceleration is equal to the fluid force slowing it down, the body will stop accelerating and continue to fall at a constant velocity, i.e. its 'terminal velocity', until impact.

Force on a Body

In this calculation, you input the body and fluid information at an instant in time, and the Fluid Forces calculator will provide you with:

For more complex calculations, e.g.; the resistance a submarine will experience travelling 20° down through seawater at 10 knots (5 m/s), 20m below sea level and in 20m waves (resulting in an axial force of nearly 2000 tonnes; see Fig 3): either you can calculate the wave, current and shape coefficient values yourself or you can import the data (see Data Import Facility below) leaving the only manual inputs as body velocity ('vb') and direction ('β'), in this case as acceleration ('ab') is zero.

Note: The submarine is a very theoretical case for wave loading, as water particle velocities will vary continually along the length of a 150m long object passing through one in any direction other than parallel. Except under very special circumstances, it is normal to evaluate the effect of current only on such large objects in the ocean.

Fluid Forces provides a data import facility for you to extract information from three other 'export' calculators (Waves (ocean), Volumes and Added Drag) if they have been installed.

The information retrieved from Volumes is the body volume and profile area (V & A).

The information retrieved from Waves (ocean) is the vertical and horizontal water particle velocities (vx & vz) and accelerations (ax & az).

Fluid Forces automatically inserts the side profile area from Volumes and assumes that if you are using data from the calculation of ocean waves, the fluid density must be that of seawater. If you need to change either of these values, then you should do so after importing from the associated Data File.

Important: You should not forget to save the calculation data in the export calculators before trying to load it into Fluid Forces.