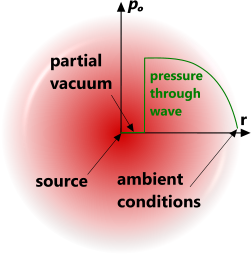 Whilst Explosions is perfectly useable as a stand-alone calculator in that it provides all the useful properties of a pressure wave resulting from an explosion, it has been designed primarily to provide the input data for CalQlata's Vents programs that will define the minimum dimensions for vents and apertures for enclosed spaces according to various standards and specifications, such as the NFPA.

An explosion is the sudden release of energy into an atmosphere in which it cannot be contained, and as with shock loads this can be anything from 1 Joule to many mega-Joules; it's all a matter of degree. As is the case for a pressure wave generated in an atmosphere with an energy density (pressure) greater than or close to that of the explosion (e.g. deep water) and non-existent if released into a vacuum.

Explosions can be generated from an atomic/chemical reaction or the release of a pressurised gas, both of which will result in a rapidly expanding spherical pressure wave of compressed air radiating away from the source and leaving a partial vacuum at its centre (Fig 1). This vacuum will ultimately fill with atmospheric gas when the pressure wave has lost most of its momentum.

Given that an explosion is simply the release of energy, more than one energy source exploding at the same time can be included in the final pressure wave profile by simply adding them together. The pressure from multiple explosions occurring in the same vicinity but separated by time may be superimposed but shifted according to their radial-time shift (Fig 2).

There are four principle threats from an explosion, each of which requires a different method of protection.

The highly localised overpressure generated by an explosion is an unnatural state for atmospheric gases (Dalton's Law), which rapidly distribute to equalise with ambient pressure and is the reason why explosion pressure waves disperse so quickly (Fig 3; overpressure).

A pressure wave generated by the release of energy within any fluid (water, air, etc.) will react against anything in its path such as an object or a barrier (e.g. container walls). Overpressure generated within a container, e.g. a room or building, can result in serious damage to its occupants from structural damage or flying objects.

Vents can be provided in enclosed spaces to prevent pressure build-up during an explosion or the risk can be moved outside behind blast-walls.

The air pressure during an explosion is initially very high (Fig 3) and any combustible materials with a lower flash-point than the temperature generated by this pressure will of course ignite if exposed to a spark or flame. However, as can be seen in Fig 3 (temperature) this risk is highly localised.

Risk of damage from excess temperature can be avoided by moving flammable materials and substances out of the vulnerable radius. In the example shown in Fig 3 it would be necessary to move such hazards more than 1m away from the energy source.

The overpressure generated will break and/or propel objects positioned close to the energy source. This threat is generally responsible for most of the damage/injury caused to property/personnel from an explosion.

If you know the velocity of the pressure wave on an object of mass 'm' you can calculate its launch energy from a modified version of Morison's equation;
F = ½.CD.ρ.A.v²
ρ.A = m/d (where distance 'd' = 1)
F = ½.CD.(m/1).v²
E = F.1 = ½.CD.m.v²
Insert the mass of the object (m) and the velocity of the pressure wave (v) into the fomula and you have a launch energy (E) that can be used to determine its flight trajectory along with the damage it could do to an impacted body
(see CalQlata's Engineering Principles, Velocity & Acceleration and Shock Load calculators)

Vulnerable objects should be positioned outside the high-pressure radius. In the example shown in Fig 3 (overpressure) it would be necessary to move such hazards more than 0.4m away from the energy source.

The ignition of any combustible substance(s) with a flash-point below the temperature of the surrounding compressed air will release additional energy from their specific heats along with the oxygen in the air that together can significantly intensify the pressure wave as the specific heat of any substances is considerably greater than its gas constant. i.e. the energy from an explosion in a methane-rich atmosphere will rise not only according to the gas constant of air (286.8J/kg/K) but also by the specific heat of the mass of entrained methane (1964.1J/kg/K) and oxygen (659.13J/kg/K).

It is normal practice to install EX-Proof (explosion-proof) equipment close to an energy source. Such equipment will have been designed to;
a) withstand a specified explosion
and
b) isolate all means of ignition 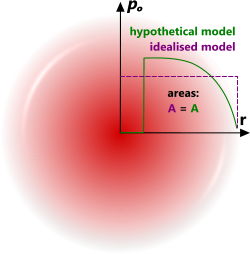 In reality the pressure, velocity and temperature profiles of the pressure wave generated by an explosion are extremely complex and vary with radial distance, elapsed time, environmental conditions and secondary effects from the proximity of obstacles, all of which interact with and affect each other. Moreover, the volume immediately surrounding the source of an explosion will become a partial vacuum due to the velocity of the radiating particles and will only refill with air after the kinetic energy of the wave front has fallen below a certain level.

Sadovsky created a mathematical model for the pressure wave generated by an explosion that has been incorporated into the explosions calculator.

CalQlata has generated a pressure wave using standard thermodynamic theory to define the behaviour of the air around an explosion, which whilst results in a similar pattern to Sadovsky's model, is more conservative in that it predicts higher pressures and temperatures but a lower velocity and faster decay due to atmospheric resistance to the pressure wave (Fig 4).

Both calculations define the properties of the pressure wave as its bow reaches discrete radial distances from the source.

The model you chose for your application should reflect the potential hazard.
(see Theories (which to choose) below).

Typical chemical energy and flash-point values are provided in the table below. 'I' means that ignition will occur at any temperature when exposed to a spark or naked flame otherwise the temperature listed represents the expected minimum for this to occur:

You may use any units you like for the thermodynamic model as long as you are consistent (see CalQlata's UniQon calculator). Example metric and imperial units are provided for the input and output data below.
However, the Sadovsky calculation model is based upon the metric units shown below - only.

You may use any units you like in the Thermodynamic calculation option, but you must be consistent (typical units are provided in the menu item; Help>Context).
Albeit, the units for the Sadovsky model must be in the metric units recommended in the calculator menu.

E: energy released from the explosive or release of pressure {J} {ft.lb} #

Ṯ: temperature of the surrounding atmosphere prior to the explosion {K} {R}

pₐ: pressure of the surrounding atmosphere prior to the explosion {N/m²} {lb/ft²} #

Explosive Substance: multiply the mass of the explosive material by its stored energy density (see Energy Sources above)

Pressure Release: multiply the volume of the pressurised gas by its pressure

Gas Cloud Ignition: You can determine the energy released by the ignition of, e.g. a methane gas cloud as follows:

Gas Constant (Rᵢ) should be replaced with cv for the same gas (based upon a constant volume process) that can be calculated as follows: cv = Rₐ x N;
where Rₐ = 518.7 J/K/kg and microstate N ≈ 3.0 for methane (pent-atomic {5 atoms}) at ambient temperature

Theories (which to choose)

This calculation is applicable to the sudden release of any energy source from a mid-air location. It does not include secondary effects such as reflection forces and absorption from surrounding obstacles. If an energy source is located close to a blast-wall designed to reflect the explosion, this will have the effect of widening the pressure band away from the wall, not increasing its intensity (Fig 5).

Sadovsky's formula is generally expected to be relatively accurate up to 10 atmospheres, above which, its correlation with reality may be less reliable.

The thermodynamic model is based upon sound, well known and universally recognised thermodynamic principles. It does, however, assume a flat pressure gradient through the pressure wall (Fig 4; idealised model), which is unlikely. However, the idealised model is no more unlikely than any other anticipated pressure wave profile given the infinitely variable nature of an explosion. Moreover, this theory is based upon the inclusion and general distribution of all energy released with no losses. It is therefore both realistic and conservative.

You will find further reading on this subject in reference publications(1, 12 & 13)