The calculation of shear forces and bending moments in a beam, with supports at each end, due to a single point load or a full-length uniformly distributed load is relatively simple (Fig 1a). But the same calculation for beams supported other than at its ends along with numerous point loads and/or variable (non-uniform) distributed loads can make this calculation a good deal more complicated (Fig 1b). 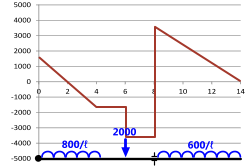 A shear force diagram is a graphical representation of the shear force variation along a beam as a result of a loading condition, the 'x-axis' being represented by the length of the beam and the 'y-axis' showing the shear force at any point along the beam.

If you divide the shear force at any point along the beam by its area at that point you will have calculated the shear stress in the beam due to that shear force
(τ = F ÷ A).

The shear force diagram for a typical complex beam loading condition is shown in Fig 2⁽¹⁾. 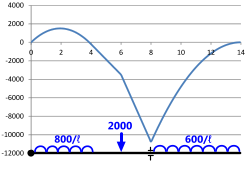 If you divide the bending moment at any point along the beam by its section modulus at that point you will have calculated the maximum bending stress in the beam due to that bending moment
(σ = M ÷ Z).

The bending moment diagram shown in Fig 3 is for the same beam loading condition as that provided in Shear Force Diagram above⁽¹⁾. 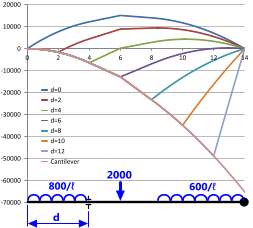 Bending moments and shear forces vary considerably with support positioning ('d') as can be seen in Figs 4 & 5. Where possible, supports should be positioned to minimise both conditions.

For example; the lowest bending moments for the loadcase identified in Fig 4 are achieved if the left-hand support is positioned at a distance about 4.0 from the left-hand end of the beam ('d=4'). Moreover, it can be seen from Fig 5 that the shear forces induced in the same beam by the same loading conditions are also at their lowest with the same support similarly positioned. 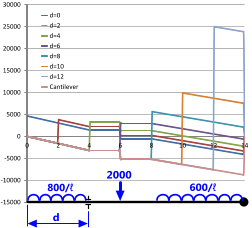 The purpose of this calculation process is usually to minimise the size of your beam. If the supports are positioned correctly, the size of the beam may be reduced considerably.

For example, as can be seen in Fig 4, the difference in maximum and minimum bending moments for a beam with two supports is a factor of 10. That is, by correctly positioning your supports you can reduce the second moment of area of your beam by the same factor (10). A similar argument may also be applied to shear forces, where it can be seen in Fig 5 that you can reduce the cross sectional area of your beam by a factor of 5 with correct support positioning.

You may apply positive loads up or down in this bending moment calculator, according to your preference but it is important that you are consistent with all applied loads.

There is no sign convention for calculated shear forces as they are equal and opposite (in both directions) and induce no rotation.

Support Positioning ('dᴬ' & 'dᴮ'): In calculation option 'TWO SUPPORT' you may position supports 'A' and 'B' anywhere you like as long as support 'A' is always to the left of Support 'B'. Calculation option 'ONE SUPPORT' (cantilever) ignores any entered support positioning dimensions ('dᴬ' & 'dᴮ') and automatically fixes support 'B' at the right-hand end of your beam.

Point Loads ('F₀' to 'F₉' & 'd₀' to 'd₉'): You may enter your loads in any order (₀ to ₉) and you may mix positioning, i.e. it is not necessary to work from one end of the beam to the other in any particular direction.

Distributed Loads (w₀ to w₄ & d₀ to d₄): You may overlap these loads and enter them in any order (₀ to ₄) and you may mix positioning; i.e. it is not necessary to work from one end of the beam to the other in any particular direction, but you must ensure that dᴸ is less than dᴿ for all loads (w₀ to w₄).

Whilst these loads may be non-uniform (wᴸ ≠ wᴿ), both ends of distributed loads must be to the same side of the beam; i.e. you may not have one end of the uniform load positive with the other end negative; in other words -wᴸ and +wᴿ is not permissible.

Maximum Shear Force ('F̌' & 'xᶠ'): This is the maximum shear force ('F̌') extracted from the shear force co-ordinates in the beam segments ('seg') along with its distance from the left-hand end of the beam ('xᶠ'). Therefore, the smaller your segments the more accurate this result will be.

Maximum Bending Moment ('M̌' & 'xᵐ'): This is the maximum bending moment ('M̌') extracted from the bending moment co-ordinates in the beam segments ('seg') along with its distance from the left-hand end of the beam ('xᵐ'). Therefore, the smaller your segments the more accurate this result will be. 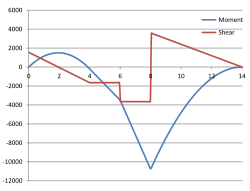 The procedure for plotting your curves in Microsoft's Excel spreadsheet is described in detail in the Catenary technical help page of this website. However, should you wish to plot the bending moments and shear forces on the same graph (Fig 7) you should select all three columns ('x', 'Mx' & 'Sx') including the headings, then plot using "Insert>"Chart>Scatter>Smooth Lines" (or "Straight Lines").

Whilst there is no error in any calculation or output result, apart from support reactions, which are exact at the support positions, the maximum bending moment ('M̌') and shear force ('F̌') are selected from the co-ordinate listings and may not be maximum values for the beam. Therefore, if you are looking for maximum accuracy for these values, you should set the segment lengths as small as possible ('seg=200').
However, it is unlikely that these maximum values will alter noticeably for 'seg' values greater than 50

You will find further reading on this subject in reference publications(1, 2, 3, 4 & 7)