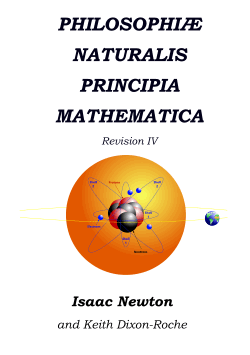 PHILOSOPHIÆ NATURALIS PRINCIPIA MATHEMATICA is the titale of Isaac Newton's original book describing his mathematical laws of natural science. He published two versions (both in latin) during his lifetime. A third revision was published after his death (in English). Keith Dixon-Roche has summarised Newton's work concerning orbital motion and filled in the gaps. Keith has therefore called his book 'Rev IV' as a tribute to and in recognition of Isaac Newton.

Keith Dixon-Roche has managed to explain the nature of the universe using Isaac Newton's laws of orbital motion, and in so doing, shown conclusively that Relativity and Quantum Theory can no longer be regarded as valid scientific theories.

This book is a simple but detailed explanation of Newton's laws of orbital motion and how they apply to all astronomic and atomic systems. Keith has attributed his book to Isaac Newton because it was Newton's original work that made these discoveries possible and is therefore the reason for its title (revision IV) and its primary author.

It explains how everything is energy and why there are no such things as; mass, heat, gravity, dark matter, "Black-Holes", singularities, event-horizons, photons or sub-atomic particles.
It includes mathematical explanations for Newton's own laws of motion together with his own discoveries; Newton's gravitational constant (G), Planck's error (h), the neutronic radius, heat constants (X, XR, Y), the true nature of light, and so much more.
It provides a detailed mathematical description of how the universe works, including; orbital motion, planetary spin, core pressure, the earth's magnetic field and the atom.

This book also includes mathematical verification for all of his models, claims and discoveries, and has since created a number of calculators for his theories that are available from this website: orbital motion, planetary spin, core pressure and the atom; the last three are believed to be the only such calculators in existence.

Below is displayed the list of chapters and the introduction to the book.

What it all Means