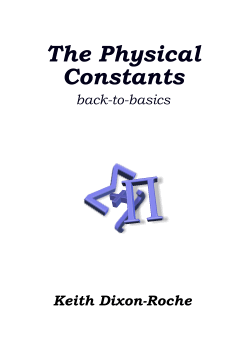 Through his work on Isaac Newton's laws of orbital motion and The Atom, Keith Dixon-Roche has managed to reconcile and simplify the physical constants.

Temperature is not an actual unit of measurement; it is a contrived unit to describe the kinetic energy of the electrons in an atom’s innermost shell.
This can be demonstrated by the replacement of the age-old method for calculating gas pressure;
'p.V = n.Ri.Ṯ' with an alternative calculation method using electron energy.
In fact, all physical properties can be established using the kinetic energy of electrons;
you simply need to know how.

Keith has defined four primary constants and two ratios from which all other physical constants and properties can be calculated, including; the magnetic, permittivity, Boltzmann's, Planck's, Coulomb's, Newton's, Rydberg's and many more besides.

Since his discovery of the neutronic radius, Keith has been able to rationalise and simplify all the physical constants, which can now be expressed in the same units allowing cross-calculation between; electricity, mechanics, magentism and energy.
For example, Rydberg's constant...
R∞ = me.e⁴ / 8.εₒ².h³.c {/m} has now become: R∞ = 1 / aₒ.ξv
(where ξv is a Planck velocity ratio)
and Rᵧ = R∞.h.c.(Z/n)² {J} has become Rᵧ = Rn/aₒ . ½.me.c²
making them considerably simpler to understand.

Moreover, by unifying the four primary constants (see above), Keith can show that all known physical constants can now be defined from just three ratios; circular, static and dynamic. The results are provided in this book.

The origins and formulas behind all the best-known constants are also fully explained making them a great deal easier to understand.

All of the paperback and digital versions of this book will be published through Amazon Books and may be acquired from their website after publication.