Co-ordinates are utilised to pinpoint a location either on a 2-D surface (map) or within a 3-D volume (vector) using angles and/or linear dimensions of longitude and latitude. 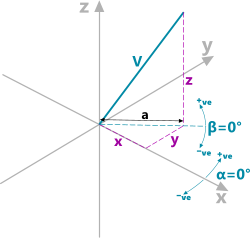 A vector (Fig 1; V) is a quantity with both magnitude and direction that can be defined using three related dimensions, either linear or angular.

Cartesian co-ordinates (Fig 1), are the linear dimensions (x,y,z) that define the end of a vector with respect to two or three-dimensional axes.

Polar co-ordinates (Fig 1) define a vector with respect to a two or three-dimensional plot using angular rotations (α,β) along with its length (V). 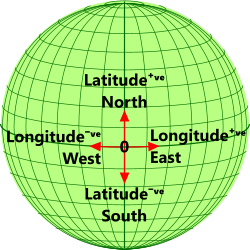 Grid co-ordinates (Fig 2) are normally used to specify a point on a map that may be a flat (2-D) plane or the surface of a 3-D volume, such as the spherical surface of a planet.

x, y, z: 3-D linear dimension from the co-ordinate origin to the end of the vector

V: the length of the vector

R: the radius of the sphere (or planet)

N/S: vertical circumferential distance up (+ve) or down (-ve) from the equator

a: horizontal 3-D linear dimension from the co-ordinate origin to the end of the vector (Fig 1)