emf to mmf and back

This page describes the relationship between electricity and magnetism as it applies to solenoids, transformers, motors and generators. 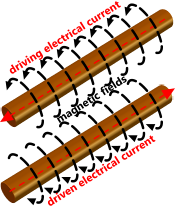 Electrical power comes from electrical charge, which can be released as either:
1) The transfer of electrons between the atoms in a conductor (DC); or,
2) The generation of electro-magnetic energy (AC).

Magnetic power comes from magnetic charge, which can be released as either:
1) The transfer of magnetic energy between atomic particles in a ferro-magnetic material; or,
2) The exploitation of magnetic-field energy (B).

# the term 'Field' as described above, is actually the reciprocal of relative charge capacity (RC); B = 1/RC and it units are C/kg or Wb/kg. 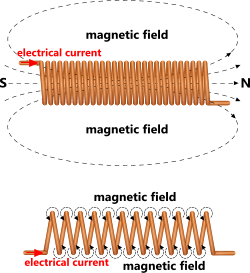 A current passing through a conductor will always generate an encircling magnetic field according to the right-hand rule (Fig 1).

If two conductors are run alongside each other and a current is induced in both of them (e.g. a return loop), the magnetic fields generated around them will work together (in opposite directions) increasing their combined strength (Fig 2).

A conductor wound into a tight coil with a current passing through it, will generate a magnetic field as shown in Fig 3. Note, an open coil will generate a coiled version of Fig 1 in which adjacent magnetic fields will cancel each other out as they will be flowing in the same direction (Fig 3).

Insert a bar of magnetic material into the tight coil, and the bar will become magnetised (Fig 4). It should be noted that when defining the north-pole of the resulting [electro-]magnet, the direction of the current in the conductor is immaterial. The defining factor is the direction around which the current orbits the coil. 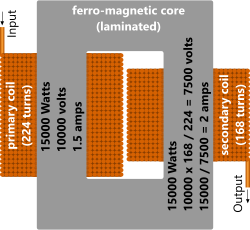 Electrical power is the product of current and voltage; p = V.A
The same power may be achieved by; raising the current and similarly reducing the voltage (and vice-versa), as long as their product remains the same. But because current is more susceptible to resistance than voltage, the most efficient method for transmitting electrical power along a very long conductor is to maximise its voltage and minimise its current. When the power is required to do work, you reverse this process. This can be done by utilising the electro-magnetic properties of a coil (Fig 5) in the form of a transformer; the transformation of electrical power.

All of the above is called electro-magnetic induction and was discovered by Hans Christian Ørsted in 1820 and explained by Michael Faraday in 1831. This phenomenon is the basis of all motors and generators.

You will find further reading on this subject in reference publications(3, 17 & 22)