The public relies on two service providers to make our lives safer on the road;

Motor Manufacturers are required to protect us in the event of an accident, by way of avoidance and protection, and;

Governments are required to reduce the probability of accidents occurring 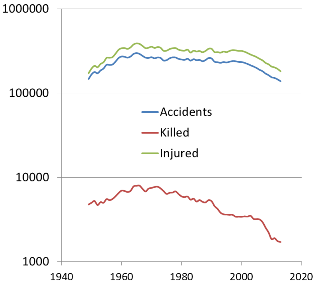 Motor manufacturers and designers are therefore doing an excellent job.

Can the same be said of our governments? 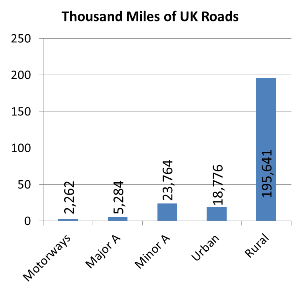 CalQlata has decided to address this issue since completing our assessment of Brakes and Tyres and Vehicle Impacts. Everything we have discovered on this subject, both for and against, even from government sources is simply rhetoric, comment or interpretation. We have found no definitive unbiased mathematical study supporting or refuting speed limits.

We are using a government’s own statistics to support or refute the speed-limit policy without including any independent data because it is difficult to argue against the results of a study in which the data comes from the same organisation that imposes the controlling regulation.

We have chosen the UK because; a) most other countries follow its example when it comes to legal matters and; b) its information is readily available, and; c) we believe (rightly or wrongly) that its information is largely untainted. 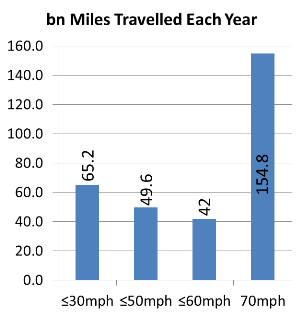 We have tried to make this assessment as short, simple and painless as possible, providing all the calculations, without manipulation or interpretation of the data or the results. This assessment is a factual summary of the UK government’s own statistics on a law it imposes on its taxpayers on the basis of safety.

Whilst the UK has been selected for examination, the following calculations apply to every country that enforces speed limits on its roads.

UK road miles are as shown in Fig 2⁽²⁾

The following is an optimised grouping into speed limit zones, which whilst approximate is sufficiently representative for the purposes of this study because of the unavoidable contrast between 30mph and 70mph speed limits and traffic usage (Fig 3). I.e. small changes to the lengths of speed limit will not affect the conclusions:
Motorways & Major A-Roads: 70mph
Minor A-Roads: ≤50mph
Urban B-Roads: ≤30mph
Rural Roads: ≤60mph 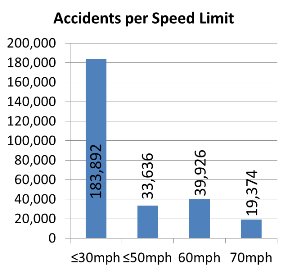 The unexpectedly high accident rate on 60mph roads (Fig 4) is due to the fact that this road-type/speed-limit zone includes 80% of Britain's roads and comprises the worst built and worst maintained roads in the country⁽⁵⁾. 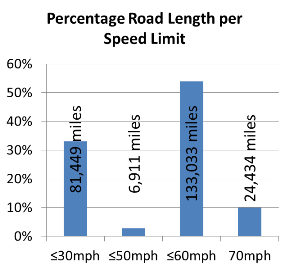 These statistics show that poor road condition and congestion must be responsible for the vast majority of the UK’s road accidents because the highest accident rate (per mile travelled) in the UK occur in the lowest speed zones (61.7% ≤30mph) and on the worst maintained roads (20.8% ≤60mph).

The UK government raised £48.1bn in 2008-2009 from its road users⁽⁶⁾ and yet had allocated only £59bn between 2000 and 2010 for road building⁽⁷⁾, i.e. only 12.5% of income from road user taxation is spent on UK roads; hence the reason for the rapidly increasing traffic density on UK’s roads (Fig 6).

Together with the UK’s speed limits (see Cumulative Braking and Accident Statistics above) the lack of spending must be responsible for congestion and the poor quality of 80% (Fig 2; Rural) of UK roads.

Therefore, the lack of spending and speed limits imposed as they are today must be directly responsible for 82.5% (61.7% + 20.8%) of all UK road accidents. 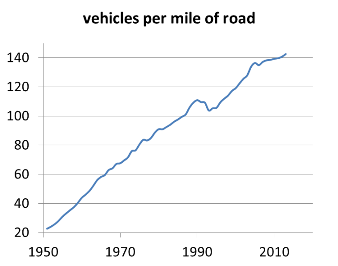 From which it is clear that speed is not the cause of accidents, which is only to be expected because in most cases, accidents can be avoided if the space to do so is available. In order to create this space there must be fewer cars on a section of road at any given point in time and this can only be achieved if car journey times are shorter. Given the lack of road building in the UK, in relation to the number of new cars registered (Fig 6), this means that speeds need to be raised in order to avoid accidents.

No significant reduction in accidents can be attributed to the introduction of the 70mph speed limit⁽⁸⁾. In fact the biggest improvement in the accident rate began at about 2000 Fig 1, when no new speed limits were introduced, but since when we have seen the biggest advances in vehicle design and construction. 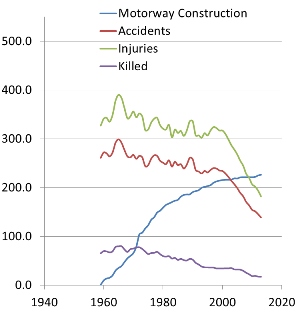 There is a far more convincing correlation between motorway building and a reduction in accidents (Fig 7) than with the imposition of speed limits.

Where speed cameras have been switched off in the UK, speeds have increased slightly but there has never been any increase in accident rate.

The UK government does not publish or collect figures for accidents that occur above any specific speed limit. Therefore we must assume that most of the 2.7% of UK road accidents in 70mph speed-limit zones occurs below the speed limit. Thus; we can also confirm that the fewest accidents (considerably less than 2.7%) on UK roads occur at the highest speeds (>70mph) but command the largest penalties.

Research may show that speed cameras have been directly or indirectly responsible for 28,000 accidents between 2001 and 2014⁽¹⁰⁾. This is approximately 1.2% of all the road accidents during the same period, which whilst may appear small, if the means whereby speed limits are imposed is actually causing accidents, this research appears to support the statistics that speed limits do not reduce accident rates.

The UK government has publicly asked itself the question "Are motorist over-taxed?"⁽⁶⁾, the answer to which should be obvious considering the UK government is making at least 700% profit from the UK motorist (see Expenditure). Properly expended this profit could remove both the following issues (Space and Road Quality) that together create 82.5% of the UK's road accidents:
Space: The lack of space on its roads causes 61.7% of the UK’s road accidents, yet vehicle density has increased seven times in the UK since the 1950s (Fig 7) and it is difficult to argue the increased lane space case as; a) the authorities do not control middle and outside lane drivers (including lorries), and; b) road widening affects less than 3.1% of UK roads.
Road Quality: At least 80% of UK roads are of poor quality and contribute to 20.8% of the country’s accidents. Road quality improvement is directly proportional to expenditure.
So it is fairly easy to see that 87.5% of the UK's road accidents can be directly attributed to its government’s >700% profit margin.

Given that speeding (imposed in the manner it is today) has nothing to do with safety the only reason for imposing speed limits must be financial and/or political (improving crime statistics). As such, there can be no justification, on the basis of safety, for applying penalty points to a UK driver’s license for breaking one of its speed limits (he or she may be simply looking for space).

So, it appears to CalQlata that, unlike the motoring industry, based upon their own figures, the UK government (who is not alone) is not only failing in its responsibilities, it is seriously overcharging its motorists whom it subsequently blames and punishes for its own failure.