The following is a mathematical study of cars' brakes and tyres since the 1930s. These calculations are not based upon factors (friction coefficients and hydraulic designs) assumed by CalQlata, they are based upon information collected from books and internet information.

However, given CalQlata's knowledge of rubber, tyrecord and friction coefficients, whilst we may not necessarily agree with the exact figures, we do agree with the comparative values.

CalQlata believes the following calculations to be a fully representative comparison of the subject matter over the time periods described.

Prior to the widespread incorporation of hydraulic activation of drum brakes (1930s), vehicle braking systems were so ineffective and upredictable that CalQlata considers the inclusion of pre-1930s cars to be difficult to include meaningfully in this report. Therefore, the earliest braking systems we have considered are the periods after the 1930s. 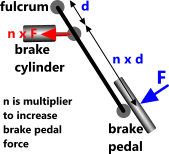 The force applied to a brake pedal in a modern car is multiplied by a factor of between 5 and 6 via a lever into the brake's master cylinder, meaning that if you apply a force of 25kgf to the brake pedal, the brake master cylinder will see about 140kgf (a typical method of achieving this is shown in Fig 1). Before the 1960s this multiplier was closer to 4 (n = 4).

The first hydraulic braking systems were put into vehicles in the 1920s. Within 10 years of Duesenburg's invention of the hydraulic brake system (1923), hydraulic brakes operated on all four wheels of all cars.

The system works by applying a force with your foot onto a pedal that forces hydraulic fluid into a master cylinder. Until around the mid-1960s, the hydraulic fluid worked on four hydraulic slave cylinders (one for each wheel) each of which forced friction pads onto the inside wall of a steel drum (Fig 2). All the hydraulic cylinders in the system were the same diameter and varied between 19mm (¾") and 25mm (1") in diameter dependent upon the performance and size of the vehicle.

This system meant that whatever force was applied to the brake master cylinder was applied equally to each wheel. Previous brake systems using cables and levers shared the applied force between each wheel, and not always equally.

Servo (or booster) systems operated on vehicle braking systems from the early 1930's but it wasn't generally available until after the 2nd world war. The servo system uses a vacuum to increase the pressure applied to the hydraulic system. Because the servo's hydraulic cylinder was then (the 1930s) about 50% larger in diameter to that of the master cylinder, it more than doubled braking capacity {the vacuum increased this pressure by another >0.07MPa (10psi)}. Modern servo systems multiply the applied load (from the driver's foot) by a factor of three or four by way of larger cylinders and more efficient vacuum systems.

In the 1980s, almost all braking systems had changed to disc pads with similar cylinder sizes but two of them per wheel, one either side of the disc, doubling braking capacity (Fig 3). Over recent years 2 or more cylinders have been incorporated to each side of each disc assembly.

Because the front brakes on any car work harder than the rear brakes under heavy braking, greater capacity must be available at the front wheels than the back in order to prevent the rear wheels from locking up. Many high performance cars today either install larger cylinders or three of them (each side of the disc) at the front wheel and two cylinders at the rear.

Another significant recent improvement to disc brake performance is the increase in disc diameter (normally installed in front wheels) made possible due to a reduction in tyre profiles and an increase in wheel diameter, which houses the brake disc assembly.

Friction coefficients are dependent upon the contact materials and independent of contact area. They are an important factor in braking system efficiency and have improved considerably over the years. Before the 1930s, brake materials ranged from wood (very early) to rubber and finally fabrics such as asbestos based linings, which appeared in the 1930s raising the friction coefficient and the ability to remain intact at high temperatures.

To conclude (and ignoring wheel braking systems with wood or rubber blocks) the history of car braking system capacities may be summarised as follows, based upon a pedal force of 25kgf:

# multiplies are 'n' multiplied by number of brake cylinders + servo

More than halving the braking distance of the heavier car with a conventional braking system and offering the potential to quarter the stopping distance of a small car...
... if only the tyres were also capable of stopping as quickly...

As mentioned above, friction coefficients are independent of contact area. So in theory it doesn't matter how many tyres are in contact with the road at the time of stopping, the weight of the car remains unchanged and will simply result in faster tyre wear. This isn't strictly true, however, as the efficiency of a tyre and therefore its ability to achieve its maximum friction coefficient is dependent upon contact area. So a wider, softer (modern rubbers and radial plies), larger wheel and all of them in equal contact with the road at the time of braking is more likely to result in maximum fictional resistance under braking than narrow, hard (old rubber and cross-plies), small wheels not all of which are in contact with the road.

So when we state friction coefficients for a tyre (wet and dry), they are based upon a high-efficiency system.

The stopping distance is again calculated using: d = Uᵢ ÷ F.μ, where F = the weight of the car on the road.

Assuming the above car (see Brakes) and its tyres achieve maximum efficiency under braking, i.e. a total mass of 1000kgf (10000N) of force between it and the road, we get:

The reaction time for most normal people would be about 0.5 seconds, which at 30mph represents about 6.75m (22.14ft). Add this to the above stopping distances and we get the following:

A tyre's frictional grip is different when skidding than when rolling. Therefore, it is essential to ensure that the wheels of a car do not lock up during braking, which is why many heavy cars and those with high-performance braking systems today use limited-slip differentials (LSD).

The following Table compares stopping distances for tyres and brakes under normal conditions.

As you can see, until today, brakes have had a lower capacity for emergency stopping than the tyres, whereas today, braking and tyre capacities are much more evenly matched.

Applying today's technology to other speeds ...

Excluding the distance covered due to reaction, the above deceleration (a = [V² - U²] ÷ 2.d) is 11m/s² (1.22g), which means that a good quality modern car with equipment working properly, should decelerate under hard emergency braking (25kgf on the brake pedal) at more than 1g (in the dry) and the car should not skid. Moreover, it would be reasonable to assume that many of today's high-performance cars with the best quality tyres and brakes should stop in distances considerably shorter than the above⁽⁴⁾, especially given the larger discs available today.

Whilst it would be reasonable to apply an efficiency loss of about 10% to all of the above figures, it is also reasonable to assume that most manufacturers are installing better than basic systems in their cars today, so a performance improvement of 10% would be equally valid.

As such, CalQlata believes that the above table is a reasonable summary of stopping distances for most properly maintained cars in 2014, and that the UK government figures are more representative of cars in the 1950's⁽⁵⁾.

This also shows that the manufacturers of tyres, cars and their braking systems are doing an excellent job.

The following calculations show what happens when a number of cars, one behind the other, encounter a speed restriction.

A leading car (Car A), travelling at 60mph (30m/s) arrives at speed restriction of 40mph (20m/s) and brakes to bring the car's speed down to the restricted speed. Each following car (B to E) reacts within half a second and decelerates at the same rate.

The following parameters are assumed:
CMS: The same CMS is assumed before and after the speed restriction⁽⁶⁾
reaction time: tᵣ = 0.5s
initial velocity: U = 30m/s
final velocity: V = 20m/s
acceleration & deceleration: a = ±2.86m/s² (6.5kgf on the brake pedal) 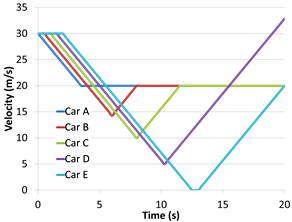 The detailed calculations carried out to establish the pattern of behaviour for all five cars are too extensive to include here but have been summarised graphically in Figs 4 to 6.

Fig 4 shows the speed of each car whilst trying to maintain CMS. The graph clearly shows Car E coming to a halt 12.5 seconds after Car A first begins to decelerate.

Fig 5 shows the distance each car covers from the time Car A first begins to decelerate. As can be seen in the graph, the distance travelled is rapidly reducing.

Fig 6 shows the spacing between each following pair of cars. As can be seen from the graph the spacing becomes exaggerated whilst trying to maintain CMS 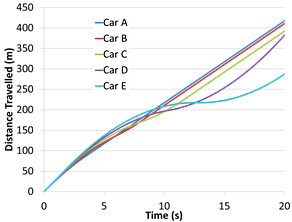 It doesn't matter how the assumptions are altered:
CMS: could be decreased with speed#,
reaction time: could be reduced, and/or
acceleration & deceleration could be increased##
... our internal calculations show that the only difference to the outcome is the number of cars it would take to bring the traffic to a halt#, fuel consumption## and the potential for an accident if a car in the traffic had less than perfect brakes and/or tyres. The greatest improvement we could achieve during the above speed restriction is traffic becoming stationary after almost 100 cars, assuming emergency braking conditions, similarly hard acceleration and a reaction time of 0.2 seconds.
The above calculations are based upon reasonable but sufficiently slow operational times for reasons of clarity (i.e. in which traffic is brought to a halt with just 5 cars).

The only way in which to avoid accumulative braking is if every single car simultaneously applies its brake when the leading car reaches a speed restricted area, decelerates at exactly the same rate and settles down at the same restricted speed, which of course is a physical impossibility. Even modern automatic braking systems need a reaction time that is necessary to establish a change in speed in a leading vehicle, and the expected approach to safety will mean that vehicle reactions will be exaggerated causing accumulated braking to occur all the more rapidly.

This is the reason why heavy road traffic invariably comes to a halt under variable speed control and when entering speed restricted road works.