Carbon steel is still today the most cost effective structural material you can find, in that it ...
... is cheap
... is magnetic
... behaves predictably
... makes the sharpest knives
... is easily formed and/or machined
... has good electrical conductivity
... has good temperature resistance
... has excellent fatigue resistance
... can be made harder than any other metal
... can be made stronger than any other metal
... is tougher than most materials of similar strength
... is made from the most abundant metallic element on earth
It is also a very versatile material in that you can take almost any composition and modify it to suit your most demanding requirements by: altering the principle alloying elements, heat treatment to harden or soften (carburising, normalising or annealing) or deformation to increase strength (work hardening).

Its biggest problem is low chemical resistance, which includes corrosion, when compared to many other metals and alloys.

It is also important to remember when hardening plain and special carbon steels that they will revert to their original hardness if reheated to, and held at, a temperature sufficient to allow recrystallisation to occur (see Tempering below). To prevent this you should use alloy carbon steels that have been designed to retain their mechanical properties under extreme conditions.

Careful consideration should always be given to its CEV when selecting the most appropriate carbon content for your needs, e.g. welding.

Unless you are a metallurgist, the following is all you need to know to enable you to select the most appropriate carbon steel for your purposes.

Fig 1 shows a typical equilibrium diagram of the principal phases of carbon steel at elevated temperatures. These phase changes allow its mechanical properties to be altered through heat treatment (see Heat Treatment below). 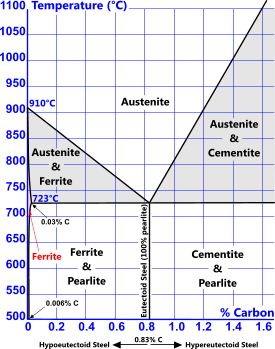 At room temperature ferrite can accommodate 0.006% carbon within its body centre cubic (BCC) lattice structure up to 723°C where its carbon carrying capacity rises to 0.03%.
Immediately above 723°C iron becomes face centre cubic (FCC) austenite that can contain up to 0.83% carbon and increases with rising temperature.
This jump in carbon carrying capacity is possible because carbon has an atomic radius 58% smaller than iron (71pm and 123pm respectively) allowing more carbon atoms to sit comfortably inside the available spaces in the less closely packed FCC structure. Austenite can also hold in solution an additional 0.87% carbon, making a total of 1.7%.

If you add more than 1.7% carbon into the melt the excess carbon will come out of solution as the metal solidifies and either float on the top of the molten iron as slag or collect as impurities in the structure during cooling making the material very brittle and prone to fracture.

All the austenite that contains 0.83% carbon will become pearlite (a eutectoid steel) as it cools below 723°C.
If the total iron-carbon mixture contains less than 0.83% carbon, the excess iron will form ferrite, which together with the pearlite constitute an 'hypoeutectoid' steel.
The excess carbon in solution in austenite containing more than 0.83% will combine with iron to form cementite as it cools between the '100% Austenite' upper boundary and 723°C creating an hypereutectoid composite of pearlite and cementite (Fig 3).
The more cementite the harder the metal, the more ferrite, the softer it will be.

The mechanical properties of steel are defined by the speed at which this phase change occurs and the percentage carbon in the mixture.

The following is a calculation to determine the number of cementite carbides per pearlite module in steel with 1.7% carbon based upon the following assumptions:
1) percentage carbon means the mass of carbon relative to the mass of iron
2) pearlite comprises alternate layers of ferrite and cementite in a repeating pattern
3) a single pearlite module is the smallest whole number of iron and carbon atoms that together represent ≈0.83% carbon
4) the basic ferrite module comprises 3 iron atoms
5) a single cementite carbide comprises three atoms of iron and one atom of carbon
6) the RAM of one iron atom is 55.847 and the RAM of one carbon atom is 12.0107

There is a well-defined relationship between the mechanical properties of carbon steel and its carbon content, which is summarised as follows ...

... and this relationship applies to all plain, special and low alloy carbon steels. 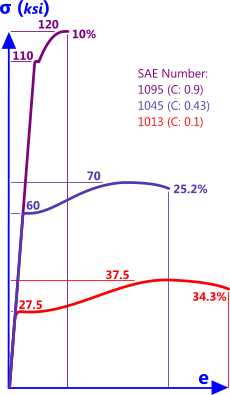 The strength-elongation relationship (stress-strain curve), which is defined almost entirely by the carbon content of carbon steel, is illustrated in Fig 2 by comparing three SAE-AISI plain carbon steel grades.
As can also be seen in Fig 2, the Young's modulus remains unchanged irrespective of carbon content.

Hardness increases with strength and decreases with elongation. A single crystal of pure iron for example, has a Brinell hardness number of less than 90 but a maximum elongation of over 45%, whilst the hardest of the heat treated carbon steels (high-carbon-chromium tool steel) can achieve a Brinell hardness number of more than 850 but an elongation of less than 0.01%

Whilst all carbon steels (including pure iron) may be heat treated and work hardened, the plain and special carbon steels will lose their modified properties with time and temperature much more quickly than alloy carbon steels and are therefore used mainly for structural members and static machine parts that operate at or close to atmospheric temperatures.

Fig 3 is a pictorial view of the temperature dependent phases of carbon steel shown in Fig 1.

The more quickly the iron-carbon mixture is cooled the less time will be available for the atoms to reposition from FCC to BCC thereby inducing internal stresses and resulting in a harder material with greater yield strength than would otherwise occur with the same amount of carbon in cold-rolled steel. 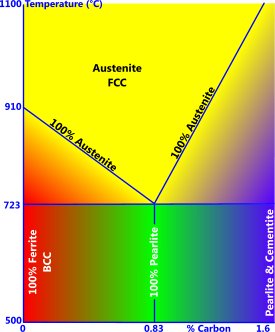 Cooling fully formed austenite more slowly through the lower critical boundary (Fig 3: 723°C) will provide more time for carbon migration and recrystallisation resulting in a softer, tougher, less brittle material than would otherwise occur with the same amount of carbon in cold-rolled steel.

Whilst the machnical properties of all carbon steels will vary with heat treatment, it is only the alloy carbon steels that will retain these artificial levels after continued exposure to heavy-duty use and high temperatures by the addition of elements that form stable carbides such as vanadium, chromium and tungsten.

Overheating carbon steel during heat treatment may cause surface burning (oxidisation and decarburisation) that can penetrate the body material through the crystal boundaries. Once this happens the material cannot be repaired by heat treatment, it must be scrapped (re-smelted). This problem can be avoided by heating when packed in lime, sand or a carbonaceous material.

The strength and hardness of carbon steel is increased by reducing its grain size and this is done by heating the material up to above the upper critical boundary (Fig 4) to generate austenite and allowing sufficient time for the carbon to distribute evenly throughout structure, followed by quenching. It is usual practice to follow this procedure with tempering. 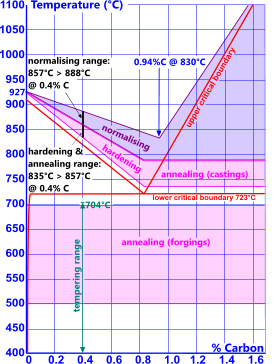 Whilst through-hardening normally applies to alloy carbon steels, this can also occur to thin sections of plain and special carbon steels.

Uniform levels of through-hardening in plain and special carbon steels of thickness greater than 50mm (2ins) is fairly difficult to achieve due to the lack of suitable alloying elements and because the inside always cools more slowly than the outside during quenching it is usual to follow this up for carbon steels with tempering.

Case hardened steels are hard on the outside, soft on the inside and normally reserved for plain and special carbon steels.

Thicker sections (>50mm) can be case hardened just by quenching whereas thinner sections may result in through hardening with this process.

For specific conditions and increased depth, especially in thinner sections, case hardening is usually achieved with carburising, the longer the duration the greater the depth of hardening.

Because the hardness is only skin-deep, the strength and toughness of the treated material remains pretty much as it was before the heat treatment. As such, much greater hardness can be tolerated in case-hardened carbon steels without risking brittle failure.

Problems with case-hardened carbon steels are as follows:
1) Body strength is not increased
2) The hardened case could easily be removed with careless machining
3) After operations have worn through the hardened case the exposed material will be soft and cannot be hardened and remachined without dimensional loss

Heat the material to within the normalising range shown in Fig 4, hold for a period of time appropriate for its thickness and allow it to cool in still air.

Normalising is carried out on carbon steel to optimise its strength (throughout its thickness) without inducing hardness.

Heat the material to within the annealing range shown in Fig 4, hold for a period of time appropriate for its thickness and artificially retard its cooling rate in an oven or similarly controllable environment.

If you don't heat the material sufficiently, not all of it will turn to austenite and the annealing process will not be uniform throughout the material thickness.

Carbon steel is annealed to soften it for Stress relieving or to improve drawability through spheroiding. Castings are annealed to redistribute the carbon and refine their grain structure making them less brittle.

Reheat the quenched steel to the appropriate temperature (Fig 5 but always below 723°C) to allow some carbon redistribution and consequent recrystallisation to occur and subsequently cool it down by quenching.

Tempering at temperatures...
...up to 230°C will result in stress relieving only
...between 230°C and 400°C will refine the grain structure
...between 400°C and 710°C will reduce strength and hardness and increase toughness

Tempering above 550°C will see a fairly rapid decrease in strength but with little improvement in toughness.

Fig 5 shows the colours of carbon steel at the most common tempering temperatures ranging from light turning tools to wood saws and springs.

After heating the material (see Strengthen and Harden above), you cool it by immersing in salt, flowing⁽¹⁾ water, oil, brine or forced air dependent upon material thickness and the level of hardness required.

Quenching is carried out on steel to harden it. It isn't usual to heat and quench steel prior to annealing or normalising.

Quenching is also carried out after Tempering (see Tempering above) but using the less aggressive methods such as oil or forced air.