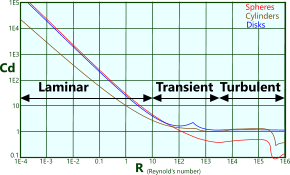 The Colebrook equation provides friction factors recommended for shape coefficients such as drag with particularly rough surfaces that are in contact with fast flowing (turbulent) fluids and generate Reynold’s numbers greater than 4000 (Fig 1).
However, this friction factor may equally be applied to transient and even laminar flow conditions if safety and/or senstivity are important.
(see Application Example below)

Whilst the Colebrook factor directly affects surface drag it also (indirectly) affects added mass and essentially to the same extent. As such, this factor should be applied to the added mass coefficient (Ca), but not to displaced mass (technical help page Fig 1), which will always remain 1.0.

The Fanning friction factor is used in calculations for flow through a pipe. 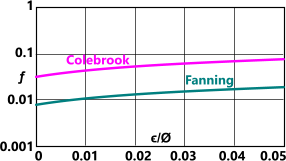 The Fanning friction factor is related to the Colebrook as shown in Fig 2 and applied in the following formula:
F = (4.ƒᶠ.L.v²) / (2.Ø.g)
Where:
F = loss in head
L = length of pipe
Ø = diameter of pipe
v = velocity of fluid
g = gravitational acceleration 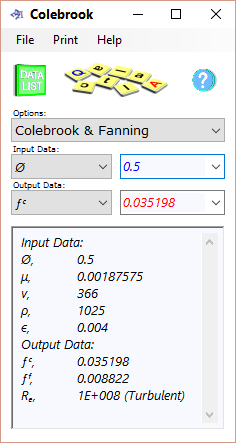 As described in our Added Drag technical help page, you can expect a drag coefficient (Cd) of between 0.5 and 0.7 for a circular pipe in slow to average flow conditions.
E.g. the Added Drag calculator predicts a drag coefficient of 0.674792 for a 0.5m diameter pipe with a perfectly smooth surface
(e.g. ϵ ≤ 0.0000004m)

If, however, the surface of this pipe deteriorates through corrosion and damage such that it comprises multiple roughened pits and crevices of up to 4mm (0.004m), and is immersed in a turbulent flowing fluid, e.g. seawater @ 2m/s, the drag coefficient for the above pipe in this condition (e.g. ϵ = 0.004m) becomes 0.861959, it is to this value that Colebrook’s friction factor should be applied, i.e.;
Cd' = Cd . (1 + ƒ)

This same modification should also be applied to the added mass coefficient.

Under normal circumstances this additional factoring is considered unnecessary for laminar and transient conditions, which air flow of the same velocity over the above pipe would generate, but it would be inadvisable to disregard it for any less-than-smooth surfaces, irrespective of flow conditions.

If you are only interested in calculating Reynold’s number, you can ignore the surface roughness value (ϵ) as it is not used in this calculation, however, you need all of the input data to determine either/both friction factor(s) (ƒᶜ &/or ƒᶠ)

You may use any units you like, but you must be consistent.
Metric and Imperial units are provided {metric, Imperial} below for information only.

Ø (diameter): The nominal diameter of the corroded pipe, external or internal dependent upon whether or not the fluid is flowing over the pipe of through it, or the width of a flat surface {m, ins}

μ (dynamic viscosity): This is the resistance of the immersed or entrained fluid to dynamic shear {N.s/m², lb.s/in²}

v (velocity): the velocity of the fluid relative to the rough surface {m/s, ins/s}

ϵ (surface roughness): The maximum depth of the undulations in the surface over which the fluid is flowing {m, ins}

Rₑ (Reynold's number): The Reynold's number for the conditions of the flowing fluid {no units}
A value for all input data except surface roughness (ϵ) is required for this output

Colebrook and Fanning friction factors are calculated using an iterative procedure and will be within ±1.0E-08 if the calculation is successful.
Unsuccessful results are possible if the input data is unreasonable, in which case an error message will appear