The best known practical example of an ellipse is Johannes Kepler’s law for planetary orbits, the size and shape (eccentricity) of which are defined by the gravitational attraction between a planet and its sun.

Each curve in the family of ellipses (Fig 1; i.e. the circle, the ellipse, the parabola and the hyperbola) is called a conic because it is defined by the angle it cuts through a circular cone (or nappe).

.... which can be deduced from the following table:

Half the width of the curve at the focus (F or F₁ or F₂) is called its parameter (p) or ordinate and is dependent upon the angle (or slope) of the cone.

The mathematical properties and relationships of these elliptical curves are defined below: 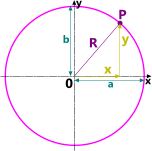 Put a stake in the ground, slip a length of rope over it and pull it tight. Walk the other end through 360° and there you have it; a circle.

A parabolic curve is generated by the perimeter of a section cut through a cone parallel to its slope (Fig 1).

The definition of a parabola is a locus generated by a point (P) of equal distance (r) to a fixed line called its directrix and a fixed point called its focus.

Two hyperbolic curves are generated by the perimeters of a section through two nappes (of a cone) parallel to their axes (Fig 1). Both foci (F₁ & F₂) are a.e from the joined apexes (or apices) of the two nappes (the origin, where x = 0)

Either of the following constitutes a definition of the hyperbola:
1) r₂ - r₁ = 2a where 2a is the distance between vertices
2) r₁ ÷ r = e 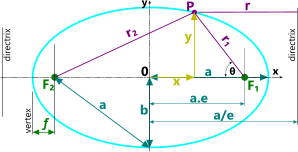 Tilt a circle and you will see an ellipse. All the shapes discussed on this page (circle, ellipse, parabola & hyperbola) are special variations of an ellipse.

An ellipse is generated by the perimeter of a section through a cone at any angle (Fig 1).
A complete ellipse only occurs if its entire circumference cuts the slope of the cone.

A projection drawing (Fig 7) is provided for those finding it difficult to understand how a slanted section through a cone (with sloping sides) can produce a symmetrical ellipse.

The Tangent of an Elliptical Curve

Fig 6. Tangent of a Curve

The usual formula for the tangent of a point (P) on an elliptical curve is:
b².x.x₁ + a².y.y₁ = a².b²
In which case you need to know both x₁ and y₁ to solve the problem

There are no unit constraints for this calculator, you simply get out what you put in. 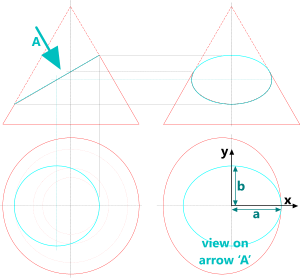 All properties are calculated for any point (x,y) on the quarter of an ellipse bounded by centre co-ordinate '0,0' and positive values for 'x' and 'y' (see Fig 5)

This calculation only works if ‘a’ (x-axis) is greater than ‘b’ (y-axis), i.e. the ellipse is always flattened vertically. Ellipses will display a warning if you enter a value for ‘a’ less than ‘b’.

All properties are calculated for any point (x,y) on the positive quarter of an hyperbola bounded by co-ordinate 'a,0' and positive values for 'x' and 'y' (see Fig 4)

This calculation only works if ‘x’ is greater than ‘a’. Ellipses will display a warning if you enter a smaller value for ‘x’ than for ‘a’.

All properties are calculated for any point (x,y) on the positive quarter of a parabola bounded by co-ordinate '0,0' and positive values for 'x' and 'y' (see Fig 3) 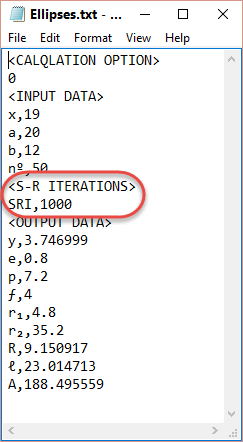 Arc lengths for the Ellipse and Hyperbola are calculated using Simpson’s Rule, therefore the smaller δx (or the greater the number of iterations) the more accurate the result (see Ellipse and Hyperbola below).
The ellipse calculator defaults the number of iterations (Fig 8: SRI) to 1000 which is virtually instant for today’s computers. You may, however, modify this value by opening the ellipse calculator’s Data File (Menu Item; ‘File>Open Data File’), edit the value, taking care not to delete the preceding comma, then save the file. You can then upload the saved data (in the Data File) into the ellipse calculator via Menu Items; ‘File>Load Data’ or ‘File>Quick Load’.

Ellipses limits the number of iterations (SRI) to 10000000 in order to minimise slowing down the calculation excessively.

You must also ensure that the SRI value being used is sufficient to provide the required accuracy, for example; if you enter a value for ‘x’ of 19.999 and 20 for ‘a’ in the ELLIPSE calculation option, you will need an SRI value greater than 1000 (i.e. 1/0.001) to achieve a result.

The result for a parabolic arc length is not iterative, it is exact. The SRI constant has no effect on this calculation.

Ellipses applies to all calculations associated with the properties of elliptical curves; i.e. the ellipse, the hyperbola and the parabola

All output data from the ellipse calculator is accurate, except for the arc length of the hyperbola and the ellipse, both of which should be within ±1E-06 provided the correct iteration value (SRI) is used

You will find further reading on this subject in reference publications(3, 12, 14 & 19)