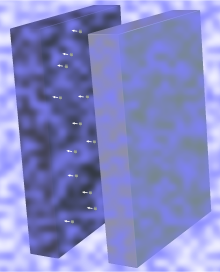 This subject is important because...

... it describes the likelihood of galvanic corrosion in metals, i.e. the removal of its atoms. Keep removing its atoms and the metal will eventually waste away. Before this occurs, however, structural metals will become severely weakened.

The following is a simplified description of galvanic corrosion (it does not encompass positive electrolyte, dry-cell or gaseous systems):

2) Most metals are positively charged making them good electrodes.

a) The most noble of the two electrodes, the cathode, must be relatively negative to the other electrode. This will be the protected metal.

b) The least noble of the two electrodes, the anode, must be relatively positive to the other electrode. This will be the sacrificial or corroded metal.

3) Most liquids are negatively charged making them good electrolytes.

a) H₂O molecules are polar (one positive end and one negative end) making water an ideal transporter of electrically charged ions.

c) The electrolyte must contain negatively charged particles if atoms are to be plucked from the anode.

4) The potential difference between the electrodes (whether natural or artificially induced) directs the cations towards the cathode to which they will become attached, thereby plating and/or protecting it.

a) If there is no potential difference between the electrodes, the negatively charged ions in the electrolyte will corrode both anode and cathode.

b) The less electronegative the electrode, the faster it will corrode.

d) If there is no electrolyte, a potential difference between any two electrically different metals (anode and cathode) will not occur#.

The dissolution and removal of alloying elements from the cathode will cause pitting corrosion, hence the inclusion of the 'element electronegativity' list in Nobility.

This is why CalQlata has provided an electronegativity list in Nobility. The loss of alloying elements through galvanic protection causes pitting and stress-corrosion cracking which should be avoided at all costs because this will cause failure in a structural material long before general surface corrosion has decreased material volume to sufficiently weaken it. Moreover, whilst you can design against general corrosion by including a corrosion allowance on material thickness, no such techniques are available for the prevention of pitting corrosion.

Nobility is designed for those wishing to avoid or prevent galvanic corrosion, however, this process can also be beneficial. It can be used to:

If you are planning to join two metals, make sure they are electrically similar, and if this isn't possible, make sure you prevent any liquid (or moisture) from penetrating the connection.